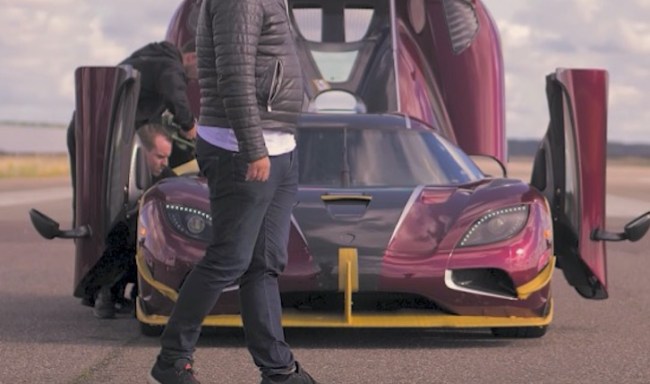 On an 11-mile section of closed highway between Las Vegas and Pahrump, Nevada, Koenigsegg’s factory test driver Niklas Lilja set the new top speed world record with an average speed of 277.9 mph (444.6 km/h). The car actually made it up to 285 mph, which is hard for my mind to even comprehend.

The Koenigsegg Agera RS which set the new top speed world record in Nevada is a pretty special car. Not because it’s been altered from how it came off the line in Sweden, but because this is also the same customer’s car which recently broke the Bugatti Chiron’s 0-249mph-0 world record by over five seconds.

According to TopGear, the team had permission to close the 11-mile section of highway for several days in order to complete the world record but it only took the team a few hours before they’d set the new top speed record. The car averaged 284.55mph in one direction and 271.19mph going back the other direction. They were driving against a strong headwind coming back and they were driving uphill, hence the noticeable difference in speed.

The previous world record for top speed was set in 2014 at the Kennedy Space Center when a Hennessey Venom GT went 270.49mph in a one-direction speed test. The Koenigsegg Agera RS destroyed that record going both directions in this latest speed test and proved that it’s the fastest production car on the planet. This is almost certain to press Bugatti and Hennessey to step up their game and come out with something to compete against the Agera RS.

For more on this story, you can visit Top Gear‘s website. And you can CLICK HERE to see full video footage of that Koenigsegg Agera RS setting that 0-to-249mph world record a few weeks ago, or just watch the video above.