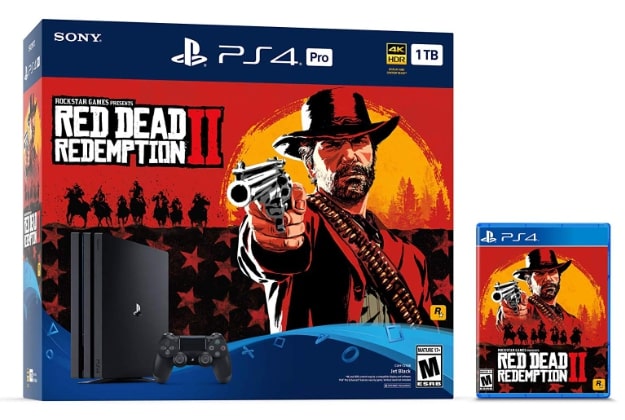 After numerous delays we are only weeks away from the release of Red Dead Redemption 2. While we anxiously await for the sequel of the Rockstar Games western epic, it’s time to start thinking about how you will get your hands on this instant classic.

Just to purchase the regular PlayStation 4 Pro it will cost you $399. The Red Dead Redemption II PS4 Pro bundle also costs $399, which basically makes RDR2 free. If you need a new gaming console or want to upgrade this may be your best bet.

Not to get all GameStop employee on you, but you can pre-order the Red Dead Redemption 2 PlayStation 4 Pro bundle from Walmart and Amazon right now. The nice thing about the Amazon pre-order is that if the game console goes on sale between now and when you get it, you’ll automatically receive the discount.

RELATED: ‘Hitman 2’ Trailer: Take Down Drug Dealers With Hammers And Bricks Of Cocaine In A Colombian Jungle

Rockstar Games recently gave some insight into the wildlife that will be found in the upcoming video game and how you’ll have to hunt and fish for food and money.

There are 19 breeds of horse in Red Dead Redemption 2 from Appaloosas and Arabians to Shires to Mustangs, and each handles differently with its own characteristics. Horses can be captured and broken out in the wild, purchased from stables or acquired by more underhanded means. pic.twitter.com/YNGpoh35BH

Hunting and fishing are essential skills for survival in the wilderness, providing food, materials and a source of income.

The wilderness amply provides and there is no reason to ever go cold or hungry.

Get amped for RDR2!

This one minute clip sums up why I think Red Dead Redemption is so special. Catch the whole episode with @TrailerJones of @EasyAllies next week! pic.twitter.com/YtpuQ0OWhB

Here is the most recent Red Dead Redemption 2 trailer.