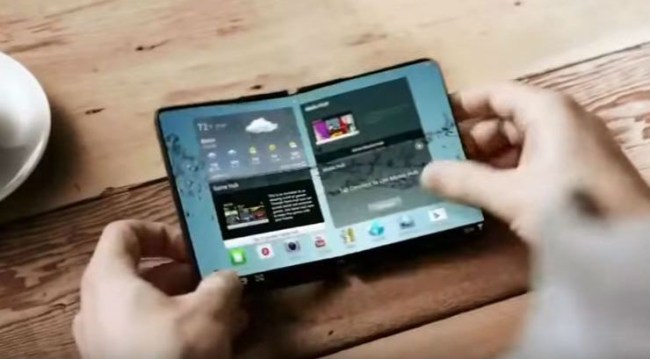 We’ve been hearing rumors about a bendable smartphone from Samsung since around 2008 and even unveiled prototypes in 2012 and 2014. However, we have yet to actually get a bendable smartphone on the market. But we might finally actually get this exciting new phone very soon. The foldable phone is said to be revealed in November and the release date could be shortly after.

Samsung’s CEO of mobile DJ Koh told CNBC that it’s “time to deliver” on the promise of the foldable phone. Koh added that Samsung has “nearly concluded” the “complicated” development process for the coveted phone.

While he gave no exact release date or specifics, he teased that more details would be unveiled in November during the Samsung Developer Conference in San Francisco.

The smartphone will have a bendable OLED display or multiple screens that will fold into each other like a wallet. The tablet or phablet-sized device is said to have a 7-inch display and will fold to be small enough to fit in a pocket.

The phone will have a display on the outside for information much like the clamshell phones from the 2000s such as the Motorola Razr. The upcoming handset is rumored to cost around $1,500 and will be under Samsung’s Galaxy Note line.

Koh said that “every innovation should have a meaningful message to our end customer.” Which could mean whatever you want it to mean. Koh did say that when people see the new foldable smartphone their reactions will be: “wow, this is the reason Samsung made it.”

While the foldable phone will be teased in November, don’t expect to see a release date of the highly-anticipated smartphone in 2018.

However, the new foldable phone is under the Note lineup and Samsung usually releases new Note models in August. The next Galaxy Note is the 10th version, so expect something special for the Note X. So you may have to wait nearly a year to get your hands on this new handset.

Samsung teased their foldable phone around the same time last year. So it would be perfectly understandble if you were skeptical of this new report.

In March of this year, there was a Bank of America Merrill Lynch report that Apple was working on their own foldable phone. Apple’s unique phone will have OLED screens and is supposed to be available in 2020.