Action Bronson’s New Cookbook, ‘Stoned Beyond Belief’, Will Inspire You To Cook And Get Baked 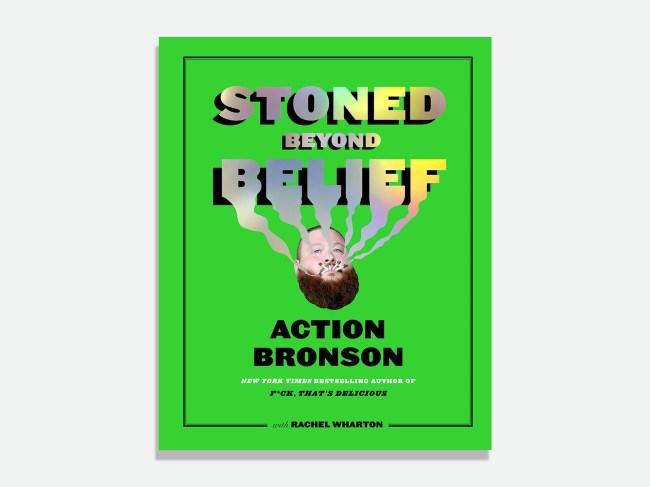 And so begins the first chapter of Stoned Beyond Belief, the newest cookbook and journal from the world hardest working cannabis connoisseur and musician, Action Bronson.

His latest collection is a comprehensive guide to properly enjoying everybody’s favorite plant and the follow up to his New York Times Bestseller, F*ck That’s Delicious.

Here’s more about Stoned Beyond Belief:

The ultimate love letter to the world’s most magical plant: Weed. Best-selling author, rapper, chef, and television star Action Bronson is a marijuana superhero, and Stoned Beyond Belief is his masterpiece.

This is an exploration of every corner of the pot galaxy, from highly scientific botanical analyses and the study of pot’s medicinal benefits to a guide to the wild world of weed paraphernalia. It’s also a very personal tribute to a substance Bronson refers to as life changing, horizon-expanding, a conduit for happiness, a connector. Weed is to Action Bronson what the madeleine was to Proust: the door to true consciousness.

Organized loosely as 100 entries, including 35 recipes, and packed with illustrations and photos, Stoned Beyond Belief is a trippy and munchie-filled experience as well as an entertainingly valuable resource for weed enthusiasts and scholars. Stoned Beyond Belief will delight Action Bronson fans and pot aficionados all across the universe.

The recipes go from awesome and involved (spinach pie) to odd and uncomplicated (Capri Sun and cheese), with Bronson’s weed tales mixed in.

“STONED BEYOND BELIEF” L.A. RELEASE PARTY IS THIS SUNDAY ILL BE SIGNING COPIES OF MY NEW BOOK @eversonroycebar MY BROTHERS FROM @namelessgenetics_ WILL BE PROVIDING ALL THE BEST SMOKE FOR THOSE LUNGS. EXCLUSIVE FLAVOR DROP GOING DOWN NEVER TASTED BEFORE STRAINS AND THIS ONE TIME ONLY PIZZA IVE CREATED WITH @triplebeampizza WILL BE SERVED WITH RECKLESS ABANDON. *RICOTTA CHEESE, SICILIAN PISTACHIO, CHARRED SPRING GARLIC, BLISTERED SERRANO CHILI , HONEY AND LEMON ZEST.* #fuckthatsdelicious

Stoned Beyond Belief is a must-read for fans of food, weed and the worlds in-between.