10 Of The Best Vintage SUVs For Sale Online This Week 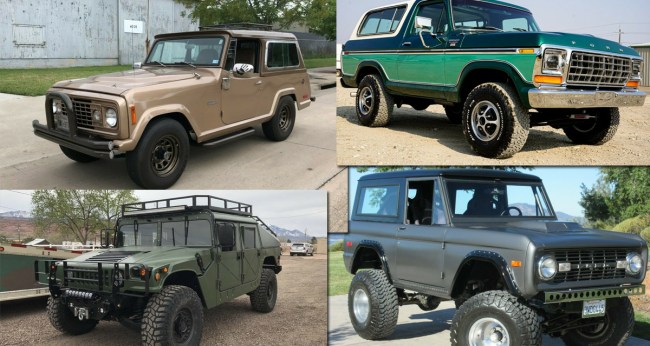 This might come as a bit of surprise to many of you, but there are a ton of uh-mazing vintage cars, trucks, and SUVs for sale right now on sites like eBay.

As fun as it is to scroll through and look at the pictures and read the descriptions, it can be a bit time-consuming. So, to save you some effort and weed out some of the less exciting listings, we’ve gone through and picked out the 10 best vintage SUVs for sale online this week.

While the asking prices are often listed below for each SUV, many of these listings are also taking offers so if you’re interested, but think the price is a tad too high, go ahead and give submitting a bid a shot. 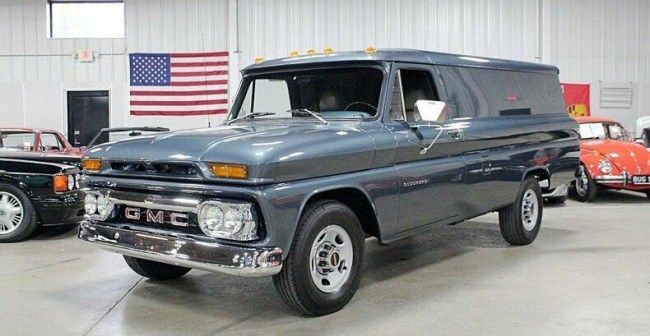 Mileage: 808
Transmission: Manual
Engine: 454ci V8
Notes: This particular Suburban C30 1-ton has been 100% nut and bolt restored with all receipts, picture documentation and correspondence. This consignor has owned this car since 1987 and has meticulously converted this beast in to the beauty it is today. The restoration was mostly completed by Randy Church Restorations out of St. Charles, MI and completed in 2006 at the tune of $50,000 at almost 900 Hours. 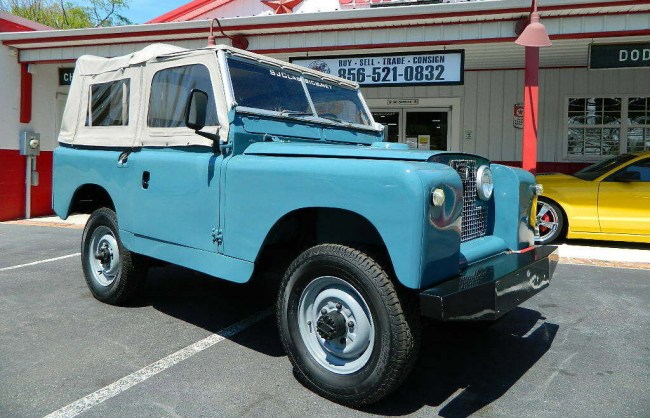 Mileage: 50,000
Transmission: Manual
Engine: 4 cyl
Notes: In the motoring world there is certain icons that provide a nostalgic factor that modern day vehicles only wish to project. The Land Rover series II is one of those few production vehicle ever to achieve this benchmark. 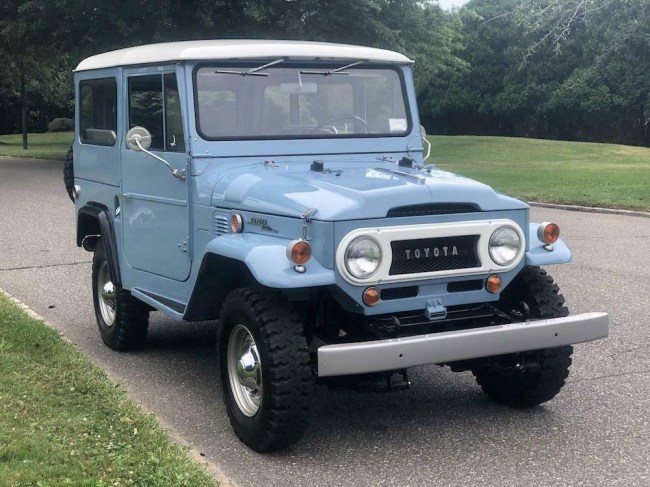 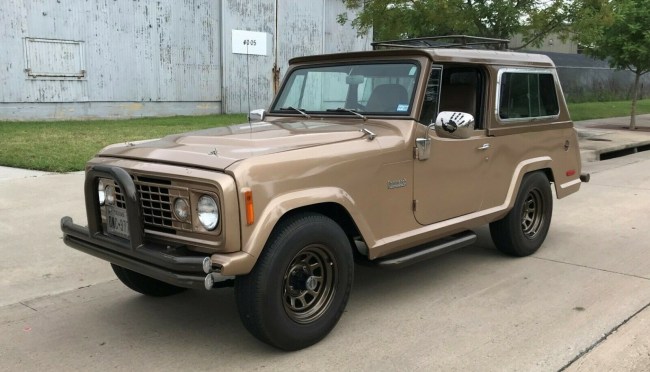 Mileage: 18,000
Transmission: Automatic
Engine: 304 V8
Notes: This was near the end of the line for the Jeepsters, succeeded by the big Cherokees and Wagoneers. Being a later edition model it got the benefit of a factory V8, giving it the chops to run down the modern interstate without getting passed by everything on the road. In fact the 304 cubic incher in this one has surely been warmed over a bit because it runs and sounds great. Backed up by a three speed automatic and equipped with a three speed transfer case with locking front hubs. 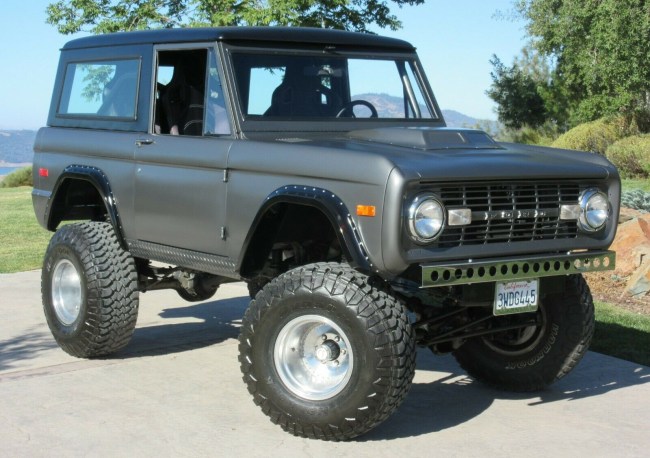 Mileage: 49,630
Transmission: Automatic
Engine: 351ci V8
Notes: This is a Bronco you can use!!! It has been professionally built for use. Take it for a spin around town, race in the Baja, cruise the beach or climb any rugged outback trail. This Bronco just came out of a fresh professional build and is ready for the Rubicon. The suspension, axles, transfer case, gears, engine, transmission, etc. have all been built to handle anything you throw at it and it can still be used as a daily driver. 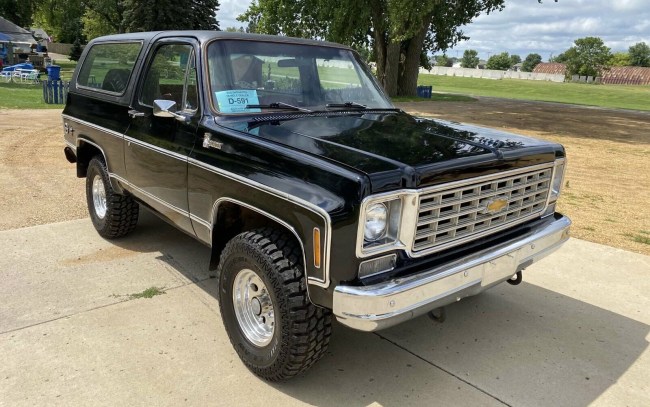 Mileage: Not listed
Transmission: Automatic
Engine: 350ci V8
Notes: This is a very original older Blazer and the square body blazer’s are a great investment as they are continuing to rise in value. It runs and drives great and has the 350 V8, auto trans, power steering and brakes and AC. It has new tires and wheels that have been added. It also has had new dual exhaust. 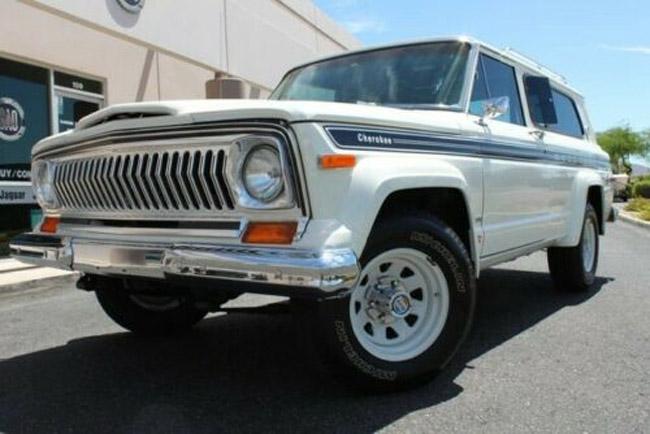 Mileage: 79,672
Transmission: Automatic
Engine: 401ci
Notes: This 1977 Jeep Cherokee S Levi’s Edition is considered the rarest of the rare and is downright stunning. It is believed this Jeep has been a garaged AZ vehicle until June 2014 when it moved to a climate controlled garage in MN where it was never driven in snow or rain. 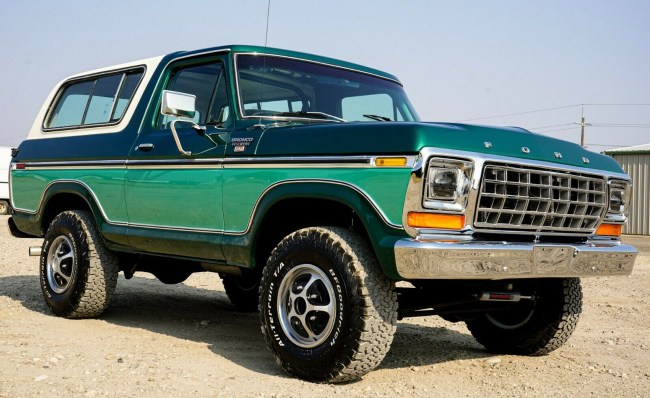 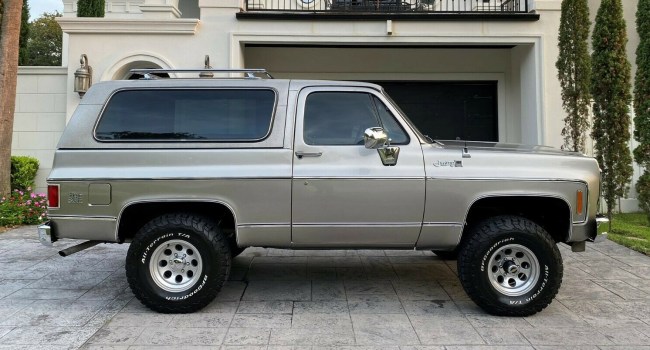 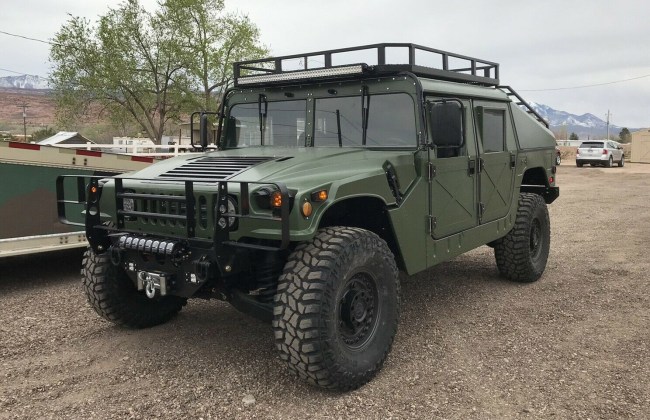 Mileage: 4,500
Transmission: Automatic
Engine: LBZ Duramax
Notes: This 1980 American Motors Humvee is a modified vehicle with updates to the exterior, interior and drivetrain. The owner has had it for 2 years. The vehicle is drivable and is mainly used for weekend drives.