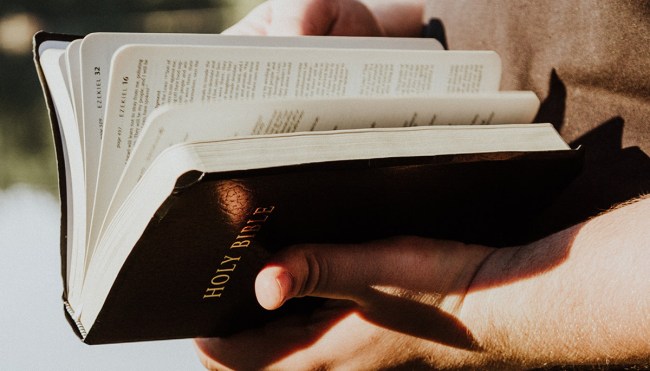 The Bible has long been a source of inspiration to people all over the world. It is also incredibly screwed up. From the start of Genesis to the end of Revelation, its pages are filled with tails of slavery, genocide, rape, incest, and almost anything else you might find in an episode of Law & Order: SVU.

If you ever encounter anyone who attempts to counter an argument by pulling out “Well, the Bible says…” (or if you happen to be the kind of person who does that on a regular basis), it’s worth remembering it features some wild stories like these that highlight just how insane some of its contents are.

Job is a good dude. He loves his kids, takes care of himself, goes to church, and is by all accounts a model citizen who follows a righteous path through life—at least until God gives him the Fresh Prince treatment by turning it upside down to settle a debate with Satan.

In the same way the Duke Brothers ruined Dan Aykroyd’s life over a one-dollar bet in Trading Places. God just chills on his cloud while Satan proceeds to demolish Job’s entire existence. He takes his money, kills his kids, gives him freaky diseases, and does everything in his power to make him denounce God for just sitting on the sidelines while he’s walloped by a tidal wave of misfortune.

In the end, Job remains faithful to God instead of turning on him like Satan bet he would. However, instead of rewarding him, God pretty much just says “Sorry about the whole ‘killing your family and ruining your entire life’ thing.’ At least you proved you’re Ride or Die. Thanks, bro.”

After all, God has a reputation to uphold.

8. Some Kids Mock Elijah for Being Bald and So He Has Them Brutally Killed

One day, the prophet Elijah was just minding his own business when a bunch of kids started ragging on him for being bald, presumably calling him “Cue Ball” and “Mr. Clean” and other similar insults.

I’m guessing he’d been catching head over his bald head for a long time, because Elijah flat-out snapped by cursing the kids like a crotchety old-man neighbor. You may note I said “cursing” instead of “cursing out,” as the kids failed to consider Elijah had a direct line to God, who was responsible for dispatching the two bears that came out of the woods and mauled the kids to death.

Here’s the actual passage from Kings 2:23-24 in case you think I’m exaggerating:

(23) “From there Elisha went up to Bethel. As he was walking along the road, some boys came out of the town and jeered at him. “Get out of here, baldy!” they said. “Get out of here, baldy!” (24) He turned around, looked at them and called down a curse on them in the name of the Lord. Then two bears came out of the woods and mauled forty-two of the boys.”

7. The Plagues of Egypt

Now, Moses did warn the Pharaoh that things were going to get out of hand unless he let his people go, but it seems like he could’ve exercised a bit more restraint than he ultimately did in Exodus.

It’s one thing to turn a river into blood or dispatch an army of frogs or locusts to make life particularly miserable for the Egyptians, but it’s another thing entirely to have a hitman kill every single first-born child in the country.

Just because Yul Brynner and Charlton Heston got in an argument doesn’t mean that a bunch of innocent kids deserved to die, right? Do you know what a more efficient plan would have been? Just kill the Pharaoh! Boom! Problem solved!

However, I guess not even God wants to mess around with a regime change in that particular region—and based on history, it’s sort of hard to blame him.

6. David Buys a Wife… With Foreskins

King Saul wasn’t exactly a fan of David, as David was popular with the people while the ruler was basically a Nixonish ogre. As a result, Saul issued a pretty interesting counteroffer when David asked if he could marry his daughter Michal, as he said he’d bless the union as long as his aspiring son-in-law could scrounge up…100 foreskins.

David—being the young go-getter that he was—promptly went out and killed all his Philistine enemies in battle before giving them a post-mortem circumcision with his sword. To make matters even more WTF, he actually went above and beyond the call of duty, as he presented King Saul with 200 foreskins to add to the collection he presumably had instead of simply stopping at the century mark.

5. God Orders Genocide and Rewards His Followers with Virgin Slaves

After leaving Egypt to weep for their dead children, God and Moses weren’t finished with their reign of terror.

As recounted in Numbers 31, Moses and God decided to open up yet another giant can of whoop-ass when they ran into the people of Midian, as the Israelites were ordered to not only kill every man and male child they could find but also, any woman who had ever “known” someone in a Biblical sense (apparently they were pissed that these sexy ladies were leading their men astray).

After butchering thousands of men, women, and children, they then stole all their goods and—just to put a nice little cherry on this screwed-up sundae—rounded up all the virgin girls and gave them to the Israelite men as slaves.

By now, you shouldn’t be surprised by just about anything in the Bible. After all, it’s clear God was running Israel like he was a sheriff in the Wild West who appointed himself the judge, jury, and executioner of his domain.

Still, the story of Jephthah from the Book of Judges jumps out as particularly screwed up.

Jephthah was headed off to battle, and in order to earn God’s favor, he vowed that “whoever emerges and comes out of the doors of my house to meet me, when I return in peace from the people of Ammon, shall surely be God’s, and I shall sacrifice them as a burnt offering.”

Things are already looking a little messed up, but they get even darker when ol’ Jeph returns home victorious and is immediately met by his beloved daughter. Well, a deal’s a deal and so Jephthah kills her and—based on the whole “burnt offering” part—likely set her on fire as well.

3. More Hijinks from the Book of Judges

I’m just going to submit this (Judges 19:22-29) without comment because….well, I think this speaks for itself:

(22) While they were enjoying themselves, some of the wicked men of the city surrounded the house. Pounding on the door, they shouted to the old man who owned the house, “Bring out the man who came to your house so we can have sex with him.”

(23) The owner of the house went outside and said to them, “No, my friends, don’t be so vile. Since this man is my guest, don’t do this outrageous thing. (24) Look, here is my virgin daughter, and his concubine. I will bring them out to you now, and you can use them and do to them whatever you wish. But as for this man, don’t do such an outrageous thing.”

(25) But the men would not listen to him. So the man took his concubine and sent her outside to them, and they raped her and abused her throughout the night, and at dawn they let her go. (26) At daybreak the woman went back to the house where her master was staying, fell down at the door and lay there until daylight.

(27) When her master got up in the morning and opened the door of the house and stepped out to continue on his way, there lay his concubine, fallen in the doorway of the house, with her hands on the threshold. (28) He said to her, “Get up; let’s go.” But there was no answer. Then the man put her on his donkey and set out for home.

(29) When he reached home, he took a knife and cut up his concubine, limb by limb, into twelve parts and sent them into all the areas of Israel.

Uh, alright then. On to the next one!

2. Lot Is Roofied By His Own Daughters And It Only Gets Worse From There

After God laid waste to Sodom and Gomorrah (I feel like that a story about God casually destroying two entire cities doesn’t even crack this list is a true testament to how supremely screwed up the Bible is), Lot—the one dude saved from the carnage—fled the burning rubble with his daughters.

While Lot’s wife was with the trio when they initially fled, she made the fatal mistake of glancing back at the destruction and was subsequently transformed into a pillar of salt—which somehow isn’t the most screwed-up aspect of this particular tale.

After having the chance to collect their thoughts, Lot’s daughter’s decided that it was their duty to repopulate the area. The fact that Lot was the only man in the area in question obviously made that mission a bit more complicated, but the daughters opted to roofie him and then engage in some series of acts that resulted in both of them being pregnant the next morning.

Oh, did I mention these were the same daughters Lot offered up to a sex-crazed mob prior to fleeing Sodom? No? Well, they were.

I need a shower. And also some bleach to scrub my brain.

1. The Crucifixion and Resurrection of Jesus

The story of Jesus’ crucifixion and resurrection has to be number one because it is so central to Western Civilization and, therefore, so familiar to everyone that nobody even stops to think about how weird and how messed up it is.

It is. It totally is. Just think about it.

Jesus gets brutally tortured and then gets literally nailed to a cross under the hot sun where people jeer and throw garbage at him and soldiers stab at him while he hangs for a while in appalling misery and then finally dies—all for the heinous crime of telling people to just be chill with each other (which incidentally is the part of the Bible that people should remember, but since it involves not being an awful person it tends to get overlooked).

The horror show surrounding the crucifixion is bad enough, but then three days later, he returns from the dead like a zombie and freaks out all his friends. Meanwhile, his best friend, Judas, who sold him out, hangs himself from a tree.

This is the central story around which our entire civilization is built! What a book.