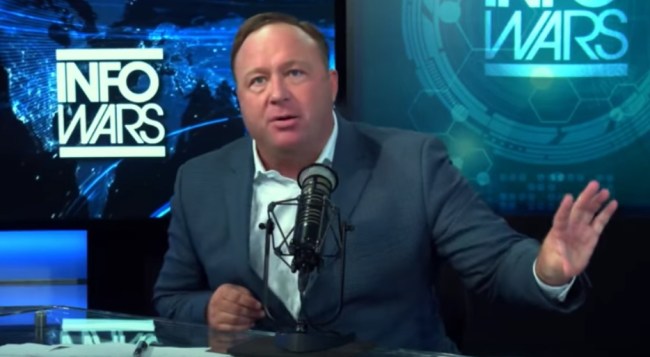 Alex Jones comin’ in HOT with the ultimate “congrats on the sex!” statement. Just the type of thing you’d expect from an insane conspiracy theorist who sincerely thinks Justice Antonin Scalia was murdered and that the Orlando, Sandy Hook, Boston, and Brussels attacks were “false flags” ordered from Masonic devil-worshiping Illuminati.

In a “dispatch” he uploaded over the weekend, Jones claimed he had already had sex with 150 women by the age of 16. Good lord, dude. via NYDN:

The Dallas native’s supposed sex-partner count came 48 minutes into a bizarre Saturday video titled “Sandy Hook Vampires Exposed” — which, as the Statesman points out, supplied no new information on the 2012 mass school shooting.

Anyway, if you want to listen to him yack about all that pipe, here you go: