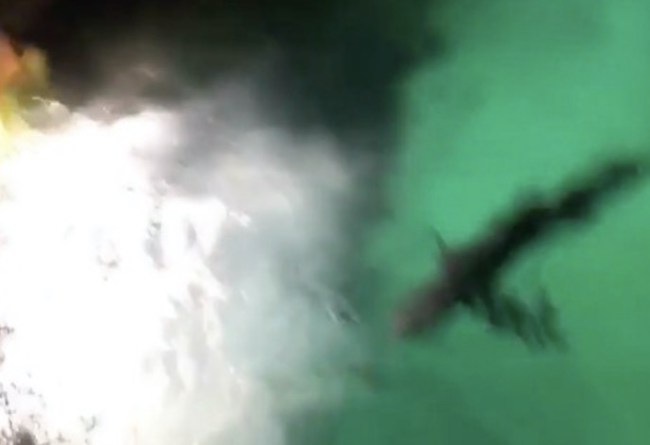 This video shared yesterday on TFM’s Instagram page is up to nearly half a million views. It shows a *possibly* drunk Spring Breaker jumping into the Atlantic Resort & Casino shark tank at night.

This particular shark tank is located just off the pyramid in the resort where there are waterslides, and for some reason there’s never security around there at night. How do I know this? Because I once witnessed an incident like this, at that exact shark tank, only what I saw with my own two eyes was 1000x more insane than what you’ll see below (story after the video). This bro is lucky that shark didn’t take a massive chunk out of his leg:

If that shark was just a biiiiit quicker he might’ve had himself a juicy midnight snack, but as it stands, that bro has a great video/story. Now, I mentioned above that I’d seen something like this before…

I’ve been to Atlantis a handful of times, the first two times were Junior/Senior trips back in H.S. After my Junior year I piggy-backed onto the trip of the graduating Senior class because we were all pretty tight.

Flash forward to one of the nights leaving the casino, drunk, and there’s a large congregation of people chilling out by this shark tank. Some people are sneaking into the water slide by climbing up it from the bottom. Others are hitting on chicks we met that night.

I will put my hand on a bible and swear to the flying spaghetti monster that this story is 100% true because it is. At some point when we’re next to this shark tank, I see a dude take off his shirt (already wearing boardshorts) and dive into the fucking shark tank head first like he’s Michael Phelps starting a race.

He then proceeds to swim down a few feet, grab the dorsal fin of a shark, and ‘ride’ that shark for about 7 or 8 feet, letting the shark swim and drag him through the water. The shark didn’t give a flying fuck that some drunk dude had just grabbed it, and after the bro let go he swam up to the surface, got out of the water, and became a fucking legend in the eyes of everyone who witnessed his shenanigans.

If I didn’t witness that happen with my own two eyes I’d never have believed it. And I hadn’t actually thought back on that story in quite some time until I saw this video of the bro above barely entering the water and then pussing out before getting attacked by that shark. I’m not trying to take away from that Spring Break bro’s video, I’m just here to tell the story of what was truly one of the craziest things I’ve ever witnessed in my life.