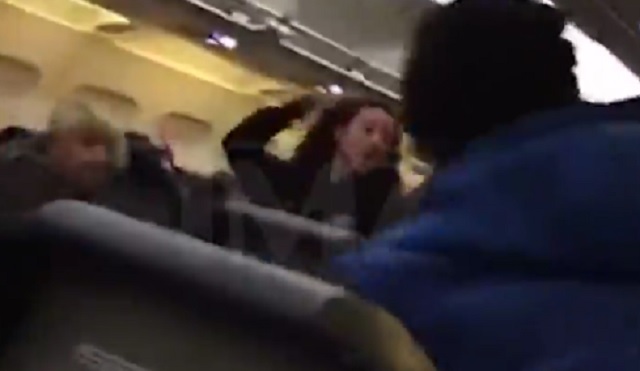 Welp, the infamous “Cash me outside” girl is back in the news and not for a good reason. 13-year-old Danielle Bregoli, who went viral after appearing on the Dr. Phil show back in December, was kicked off a Spirit Airlines flight yesterday due to an altercation with another passenger on the plane.

The “Cash Me Ousside” girl caught someone inside an airplane Monday evening with a shot to the face … and police ended up yanking her, her mother and another passenger off their plane … TMZ has learned.
We’ve learned Danielle Bregoli and her mom were boarding a Spirit Airlines flight out of LAX last night … when Mom got into a dispute with a female passenger. We’re told Danielle’s mother was struggling to put her carry-on bag in the overhead, because she’s wearing a walking cast for an injured foot … and the wait wasn’t sitting well with the third party.

As you can see in the video below, the passenger began berating Danielle by calling her trash and by yelling “Cash me outside” which set off Danielle into a furious rage.

After the passenger got up to confront the 13-year-old, Danielle’s mother got in the lady’s face and all hell broke loose.

Here’s a different angle of the brawl.

While waiting for the police to arrive the passenger continued berating Danielle by calling her a “wigger” and spitting in her direction.

According to TMZ all three were kicked off the plane and were banned for life by the airline.