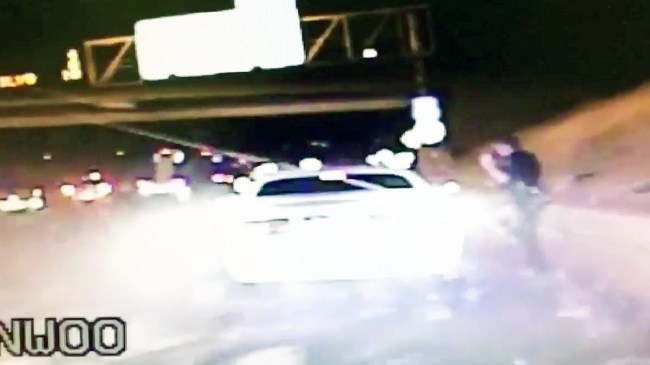 Pretty terrifying situation for a police officer in Las Vegas. During a routine traffic stop, a beer truck lost control on the highway and toppled over, causing the officer and car to douse him with “a tidal wave of beer.” via WNEP:

Just before the incident Trooper Travis Smaka can be heard asking the driver, “You guys have anything to drink tonight?”

The driver can be heard telling Smaka he has not been drinking.

“Just as I ask the question, I hear the sound that always gets the hairs on my neck standing up, of brakes locking up,” explained Smaka.

Moments later, a beer truck, barreling down the road, loses its load.

Trooper Smaka and the driver are pelted with beer bottles and cans.

“Well, over 1,000 pounds of beer shattering and a tidal wave of beer coming at me,” noted Smaka.

That sucks. Fortunately no one was hurt. And also just another reminder of what the men in blue put on the line even in routine traffic stop.

Shout out to all our first responders like this officer. They’re the real MVPs. He’s earn his cold one for the week after getting showered with a couple thousand.