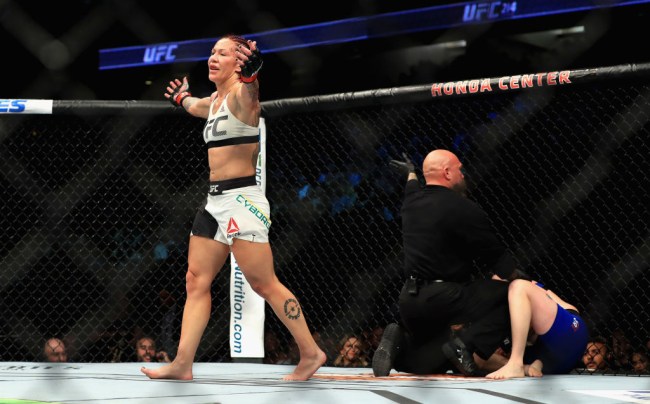 With only a month and a half away from UFC 219, we finally know the main title fight. On Thursday, it was announced that Cris “Cyborg” Justino will battle Holly Holm for the women’s featherweight title at UFC 219. The highly anticipated bout between arguably the two most popular UFC fighters right now and the other UFC 219 fights will go down at the T-Mobile Arena in Las Vegas on Dec. 30.

Justino (18-1) will defend her women’s featherweight championship, which she won the vacant title with a third-round TKO of Tonya Evinger on July 29 at UFC 214. This is Cyborg’s first defense of the title. Justino’s unbeaten streak dates all the way back to 2005 and includes wins over Gina Carano, Marloes Coenen (x2), and Leslie Smith. The 32-year-old Brazilian is a former Strikeforce and Invicta FC champion.

Holm (11-3), who is a former UFC women’s bantamweight champion, had a three-fight losing streak before she snapped it with a knockout of Bethe Correia on June 17 in Singapore. The 36-year-old mixed martial artist’s greatest moment in her career came when she defeated the seemingly indomitable at the time Ronda Rousey at UFC 193 on November 15, 2015, a defeat that led to the demise of Rousey’s career. Holm’s resume also features victories against Marion Reneau and Raquel Pennington. This will only be Holm’s second fight at the featherweight class, her first foray came against Germaine de Randamie when she lost in a unanimous decision at UFC 208 in February 2017. Later, De Randamie vacated the title after she refused to defend it against Cyborg.

Dan Hooker was in the news this week when he captured video of UFC fighters Fabricio Werdum and Colby Covington having a public blowup in Sydney. Covington spouted slurs at Werdum and he retaliated by throwing a boomerang because when in Australia.