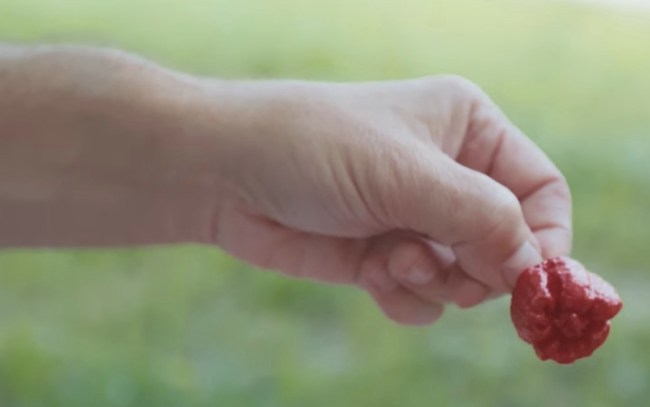 The ‘Carolina Reaper’ pepper is the hottest pepper on the planet according to Guinness World Records. It measures an insane 2,200,000 Scoville Heat Units. By comparison, the Ghost Pepper (Bhut Jolokia) measures 1,041,427 SHU’s and Tabasco sauce measures between a measly 2,500–5,000 SHU’s.

‘Smokin’ Ed Currie is the man responsible for breeding the Carolina Reaper pepper, and the video team over at Great Big Story caught up with Ed to talk about how this pepper came into existence. As you can see, Ed Currie is obsessed with spice and creating hotter peppers than the mind can even imagine.

Throughout this short video, there are all sorts of interesting moments, but the thing that caught my attention the most was Ed Currie claiming that he has world record breaking hot peppers stored away for a rainy day. Ed knows that there are other farmers out there trying to break his record. In order to stay ahead of the game, Ed has been growing peppers even hotter than the Carolina Reaper and it appears as if Ed’s just waiting to release these peppers at a time when someone gets close to his record.

I’ve never eaten a Carolina Reaper pepper, nor do I plan on ever eating one. I’ve had Ghost Pepper Curry in NYC and it was hot but didn’t ruin my life. When I see videos of people trying the Carolina Reaper peppers and coming in contact with the pepper’s seeds, it looks like their lives are falling apart. Why anyone would ever want to experience that is beyond me. If any of you bros out there have tried this pepper, I’m curious why you chose to torture yourself?