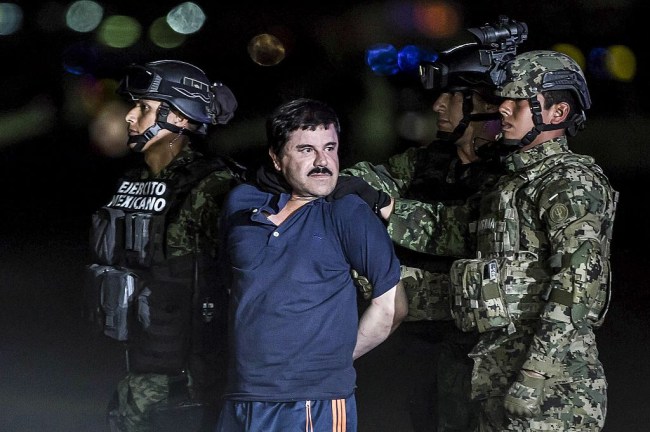 Late last week, on former President Barack Obama’s last day in the White House, infamous Mexican drug lord Joaquin ‘El Chapo‘ Guzman was transferred from Mexico to a jail in New York City. He was arraigned in Brooklyn Federal Court on Friday afternoon, getting hit with 17 charges ranging from drug trafficking to murder.

Afterward, El Chapo was transferred to Manhattan’s Metropolitan Correctional Center, or MCC, where he’s being held in a high-security wing of the detention center known was the 10 South wing. The 10 South wing of MCC is reserved for the nastiest of criminals, and most guests at 10 South are kept in solitary confinement.

Ahmed Ghailani, a Tanzanian native serving a life sentence for his role in bombing two American embassies in East Africa in 1998, told a psychiatrist that he found the Guantanamo Bay detention camp “more pleasant” and “more relaxed” than the MCC, according to a forensic evaluation report obtained by the Daily News.
“While (at Guantanamo), he was able to recreate with others, to access DVD’s and in general felt that the atmosphere provided more freedom to detainees,”

‘Less pleasant than Guantanamo’ is a pretty grim description of any place, but to be honest his inmate’s description doesn’t sound all that horrific. It’s the other inmate’s accounts of MCC that should have El Chapo feeling a little rattled (via NYDN):

Uzair Paracha, a Pakistani American who was held at the MCC for two years after providing material support to Al Qaeda, said in a published account that it was common for inmates to partially lose their eyesight because the jail’s lights were kept on 23 or 24 hours a day.
The jail’s frosted glass windows shut out all view of the world outside, and the slot on each cell door was generally kept shut at all times, according to Paracha, who was interviewed for the 2016 book “Hell Is a Very Small Place: Voices from Solitary Confinement.”

“If you wanted to intentionally design a place to drive people mad, you’d be hard pressed to do better,” Patton, the executive director of Federal Defenders of New York, told the newspaper. “The fluorescent lights are always on…The only sound is the occasional clanking of metal when doors are opened and closed.”

Until now, I didn’t know you could go blind from being subjected to 24-hours of light each day. That sounds like one miserable ass way to go through prison life. Prison is already a truly miserable existence even when you have the use of your eyesight. Then imagine being isolated 24 hours a day with the lights on. That sounds like the worst possible way to live out your days.

To keep on reading about how miserable this prison is, and to see where exactly the facility is located within Manhattan, you can CLICK HERE to head on over to the New York Daily News.