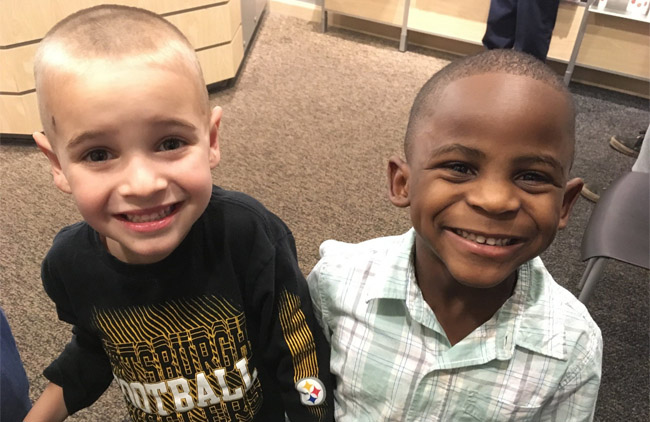 There have been many times in my life where I, an adult, have actually learned a valuable lesson from a kid. Their innocence allows them to see through much of the BS we adults filter our view of the world with and gives them clarity many of us lost a long time ago.

This story, shared by a mom named Lydia Stith Rosebush, is one perfect example of that.

You see, her 5-year-old son Jax needed to get a haircut, but he wanted to get it cut a certain way. He wanted it to be cut short like his best bro Reddy so that, wait for it… his teacher wouldn’t be able to tell them apart.

This morning Jax and I were discussing his wild hair. I told him that he needed a haircut this weekend. He said that he wanted his head shaved really short so he could look like his friend Reddy. He said he couldn’t wait to go to school on Monday with his hair like Reddy’s so that his teacher wouldn’t be able to tell them apart. He thought it would be so hilarious to confuse his teacher with the same haircut.

WAVE 3 News, once they got wind of this, followed Jax to get his haircut with his bud Reddy in tow and the video they shot of them goofing around was filled with cuteness and feels.

In the video Reddy nails it perfectly with his observation of “Jax is me … and I’m Jax.”

As Jax’s mom put it in her Facebook post, “If this isn’t proof that hate and prejudice is something that is taught I don’t know what is. The only difference Jax sees in the two of them is their hair.”