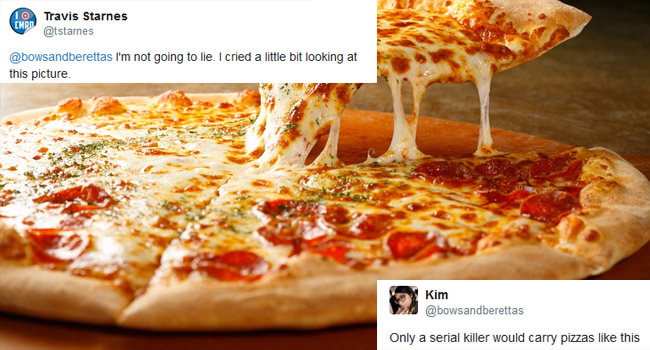 Some things just cannot be forgiven. Especially when it comes to pizza.

Putting peeps on a pizza is one of those things.

Carrying your pizza like this guy spotted by someone on Imgur is another.

Naturally, this photo made its way to Twitter, because everything in the entire world does eventually, and people were horrified.

I think I'm witnessing a drug deal. I mean who the hell carries their pizza like that? pic.twitter.com/FubhZQvWD1

The person who took the photo also pointed out that this guy wasn’t carrying frozen pizza nor were they calzones, because calzones from Pizza Pizza come in different boxes.

Only a serial killer would carry pizzas like this pic.twitter.com/RkZZ4oic1R

@bowsandberettas @freedarko He carries the skins of his victims in those pizza boxes.

@bowsandberettas @SWAIM_CORP I work @ a pizza place and dumb shits do this all the time, I try to warn them but they are too focused on marking their next victim

@bowsandberettas I'm not going to lie. I cried a little bit looking at this picture.

@Mr_DrinksOnMe Fuuuuuck when the takeout chick wouldn't carry it to my car when I was on crutches 😭 Destroyed. Humans don't do this!

@bowsandberettas WHAT'S in the box!!?

Me: when I find out all the cheese slid off the pizza cause headass doesn't know how to carry the box. pic.twitter.com/cf5pO0PRp8

@bowsandberettas @Jarlaxxe my mom carries cakes the same way. I still was not able to "fix" this.

@ValorClubNJ @bowsandberettas @MCUfeld Pizza Pizza is a Canadian chain and their pizzas are like fucking bricks cheese is not going anywhere.

@Mr_DrinksOnMe @BlackTonyBlair fact that it's Pizza Pizza means it's gotta be cover for drugs. I refuse to believe someone would intentionally eat 2 boxes of Pizza Pizza