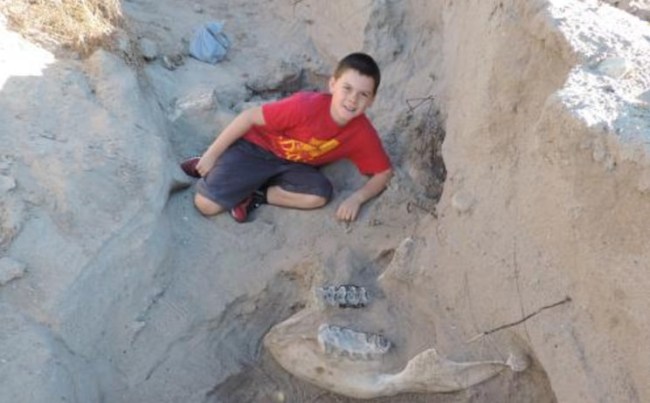 How many times did you trip and fall last weekend because you may have indulged in a little too much Maker’s Mark? And when you fell on your face the only thing you probably found was a puddle of cheap Riesling wine puke that your girlfriend deposited 43 minutes earlier and failed to clean up. This lucky kid falls and finds a goddamn million-year-old fossil! Right time, right place I guess.

Jude Sparks was playing with his brother, Hunter, in the desert in New Mexico. They were goofing off as young boys like to do, when then 9-year-old Jude tripped over something big. “I didn’t know what it was,” Sparks, now aged 10, told El Paso ABC affiliate KVIA. “I just knew it wasn’t usual.” After further examination, the young boy thought it was a big fat rotten cow. Not quite. It was actually the skull of a stegomastodon, a tusked mammoth-like mammal that lived some 1.2 million years ago and a distant cousin to modern-day elephants. Finding a stegomastodon fossil is considered a rare find and are much more uncommon than coming across a mammoth.

The lad informed his parents who were biking nearby of his new-found creature preserved in the desert sands of Las Cruces. They assumed it was an elephant, but weren’t sure so they emailed Peter Houde, a biology professor at New Mexico State University. Houde and the Sparks family went back to the fossil graveyard and Houde determined it was a stegomastodon. “This may be only the second complete skull found in New Mexico,” the biologist said in a statement. Then in May, a team of paleontologists from NMSU excavated the nearly 2,000-pound fossil. When you were 9-years-old, the only thing you stumbled on was your dad’s secret stash of Playboys. A grand discovery in its own right.