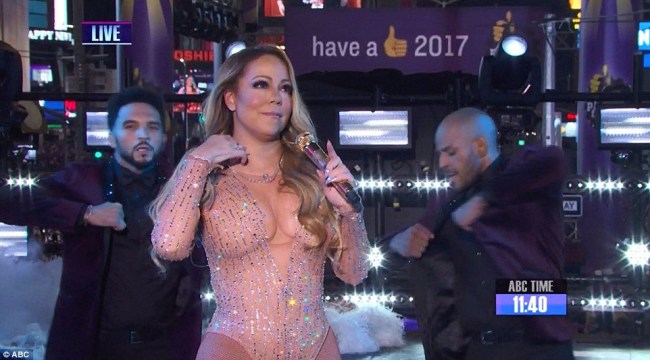 Add Mariah Carey to the list of celebrities who died in 2016. During ABC’s live broadcast of Dick Clark’s New Year’s Rockin’ Eve on a stage in Times Square, Mariah Carey had an unmitigated disaster in front of millions.

The singer was lip-syncing her performance when one of the songs played did not have the lead vocals. So one would imagine that Mariah would do a crazy thing and actually sing her own song.

Instead, she walked around on stage and blamed everyone else for the catastrophe. The first song she was not able to sing was “Emotions.” A song that Mariah Carey has literally been singing for 25 YEARS.

She then instructs the crowd to sing her song. If only there was a professional singer in the area with a mic in their hand. If only…

“Trying to be a good sport here,” she said. Then she was totally not a good sport and stormed off the stage before finishing her three-song set.

Mariah had this to say about her pathetic and humiliating “performance.”

Shit happens 😩 Have a happy and healthy new year everybody!🎉 Here's to making more headlines in 2017 😂 pic.twitter.com/0Td8se57jr

I understand that shit happens, but oooooff that was hard to watch. I’ve cringed less watching beheading videos than this debacle.

Woke up to Mariah Carey trending and expected the worse … Relieved to see her NYE performance was the last thing to die in 2016 pic.twitter.com/iQ9Ca8sG0S

Even Milli Vanilli is embarrassed by Mariah Carey's debacle. pic.twitter.com/8179cHu7jA

[Mariah Carey]: sing for the audience

Ohio State should thank Mariah Carey. They no longer have the worst performance of the night.

I think Russia hacked Mariah Carey's microphone. Knock it off Putin, you're taking it a bit too far…

when you didn't do any work for the group project and it's your turn to present a slide https://t.co/L7Kcj8Gm3h

With 15 minutes left to 2016, you thought you'd seen the worst, then Mariah Carey happened #abcnye

I’m okay with having Mariah Carey’s New Years performance be the first meme of 2017.

No matter how hungover you might be feeling today, just remember at least you aren't Mariah Carey's PA