I’ll give you the really abbreviated timeline of what’s going on here so we can jump straight to Mark Zuckerberg defending his move to kick Hawaiian’s off the land they own like a ‘bullying modern colonizer’.

— Last month, Mark Zuckerberg announced that he and his wife were going to buy a shit ton of land in Hawaii to establish a residence there after building a luxurious island getaway. You can read his initial Facebook post on that here.

— This week, news broke that Mark and his wife were moving forward with this plan by kicking native Hawaiians off the land they rightfully own. They’re allegedly doing this by circumventing the individuals and going over their heads to purchase the land.

— Last night, after a total furor over the news that Zuckerberg and his wife were kicking Hawaiians off their ancestral land so he could build himself a 700-acre getaway he took to Facebook (where else?) to defend his actions. Here’s what he has to say: 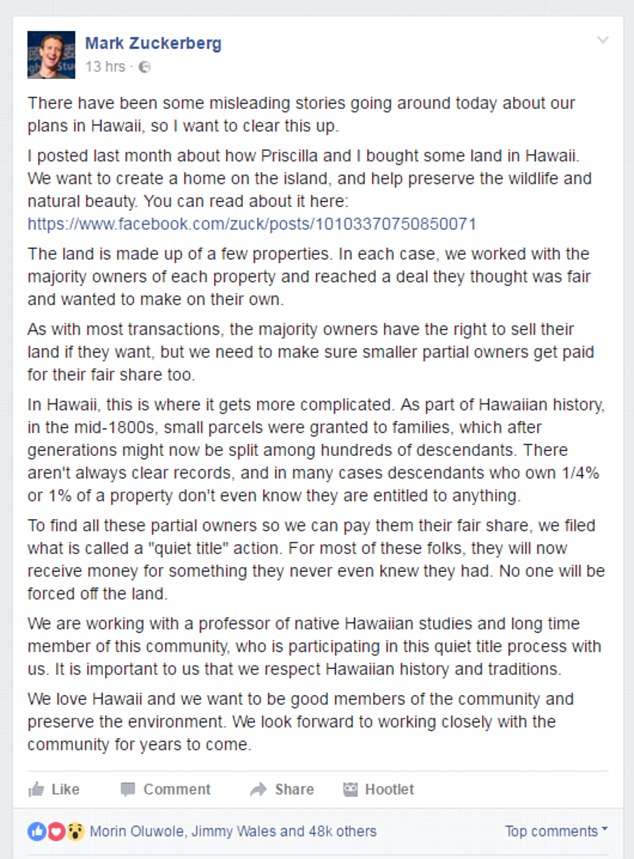 If you go back and look at Zuckerberg’s first post on how excited he was to kick Hawaiians off their ancestral land because his son Max loves the exotic birds it’s easy to see how fucking tone deaf Mark’s been throughout the process. It never clicked in his head that the land he plans on buying means more than $$$$$ to the native Hawaiians, that it’s not at all about money.

In order to defend ‘his land’, Zuckerberg has built a wall. Yes, an actual brick and mortar wall. He’s erected a 6-foot-tall wall around the property to keep out the natives (some of them have rights to the land).

A ton of websites are claiming that Zuckerberg’s ‘suing’ to remove these native Hawaiians from the land they rightfully own, and even after defending himself on Facebook it seems like he’s doing exactly that…to a certain degree. He’s suing to remove them but also compensate them in the process.

The plot of land in question is 700 acres, which is a fucking insane amount of land for anyone to own in Hawaii, but he’s a billionaire and can do whatever he likes with his money just as long as it’s not dicking over rightful owners of the land, and in this case appears he’s trying to jimmy it right up there.

As is the case with all lawsuits involving billionaires I’m sure this will end with Mark Zuckerberg getting his way and people forgetting this ever happened. But, if you want to stay fully informed of the situation and see how deep this rabbit hole goes here are some articles with more information: The Verge, the Daily Mail, and US Uncut.