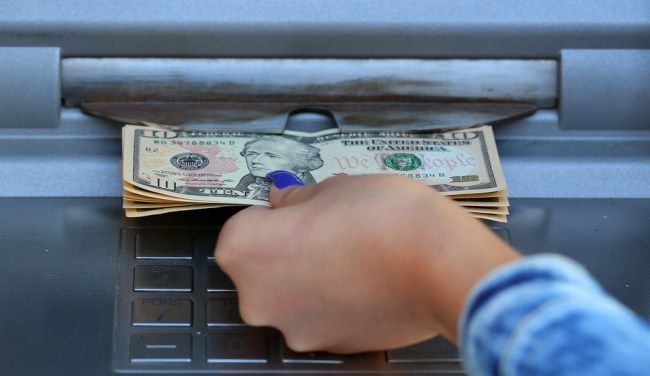 We all use ATM machines, right? Well, next time you use an ATM you might just want to dip all of the money that you receive in some type of anti-bacterial gel because, good lord, that cash is disgusting. There is DNA, traces of drugs, bacteria, and disease-causing viruses among the many gross things you’ll find on those bills, reports Popular Mechanics.

In April, a new study identified over a hundred different strains of bacteria on dollar bills circulating in New York City. Some of the most common bugs on our bills included Propionibacterium acnes, a bacteria known to cause acne, and Streptococcus oralis, a common bacteria found in our mouths.

The research team, led by biologist Jane Carlton at New York University, also discovered traces of DNA from domestic animals and from specific bacteria that are associated only with certain foods.

A similar study recovered traces of DNA on ATM keypads, reflecting the foods people ate in different neighborhoods. People in central Harlem ate more domestic chicken than those in Flushing and Chinatown, who ate more species of bony fish and mollusks. The foods people ate transferred from fingers to touchscreens, where scientists could recover a bit of their most recent meals.

We don’t leave only food behind. Traces of cocaine can be found on almost 80 percent of dollar bills. Other drugs, including morphine, heroin, methamphetamine and amphetamine, can also be found on bills, though less commonly than cocaine.

Umm, why is cocaine found on 80 percent of dollar bills? Are there that many more cokeheads out there than I realized?

Among the bacteria that has been found on dollar bills we have quite the potpourri of bad, including Salmonella, E.coli and MRSA. So yeah, putting a dollar bill anywhere near your mouth or for that matter your fingers after touching a bill = bad idea.

Luckily, they report that disease transmission linked to money is rare, but just in case you might want to visit the website WheresGeorge.com sometime to see exactly where some of your money has been. Physicists at the Max Planck Institute and University of California, Santa Barbara used the site to predict the spread of swine flu back in 2009. That or just be like me and continue to be blissfully ignorant because pretty much everything will kill you these days anyway.