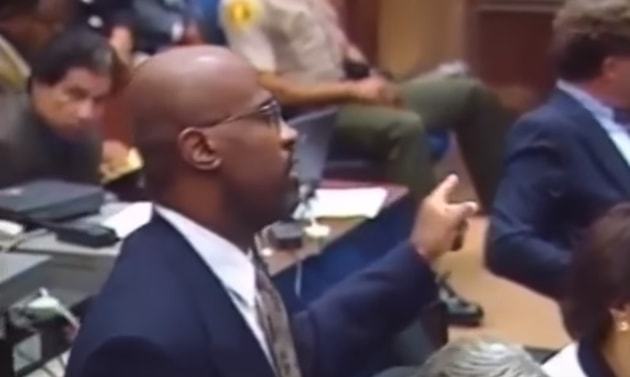 O.J. Simpson was granted parole after his hearing and will be released on October 1. Simpson was granted release for his 2008 conviction of an armed robbery involving two sports memorabilia dealers in a Las Vegas hotel room. The former football legend was moved out of general population and put in protective custody because prison officials believe that it is possible that an inmate “with nothing to lose” may hurt or kill Simpson before his release to raise their own profile. Christopher Darden is a man who knows Orenthal James Simpson, he was the prosecutor on O.J.’s infamous murder trial. On Saturday, Darden gave a Reddit AMA and there were some interesting revelations.

IceCubeTrey55: What was the reaction of your family and friends after they learned you had taken the case?
Christopher Darden: I didn’t really have any friends outside the DA’s office. And a lot of those friends were supportive while others, even though they were prosecutors, went about the business of stabbing me in the back every chance they got. But that is the nature of lawyers — to consume their own.

oopleeaze: Who do you think was the most credible witness in the trial?
Christopher Darden: Philip Vannatter.

aFamiliarStranger: My question is in regards to the suitcase that was in OJ’s custody on the day he arrived from Chicago; later, Rob Kardashian walked away with it. I’m not asking for speculation on what was in it, but rather curious how big of a focal point it was for the prosecution team to obtain it? Do you think the state could have gotten the contents of the suitcase? And finally, how do you personally feel about about potential evidence walking out the front door for the “Trial of the Century”?
Christopher Darden: Every time I see video of Simpson handing the Louis Vuitton bag to Kardashian, it makes me sick. We never learned the contents of the bag. I brought Kardashian to the Grand Jury and asked him about the bag under oath. There’s nothing more I could say about that.

TreasonousTeacher: How did Johnny Cochrane change the tone of the trial from murder to racism so effectively?
Christopher Darden: Cochrane used the media to change the conversation as effectively as Donald Trump does.

FresherUnderPressure: How do you feel on the whole ‘if the glove doesn’t fit, you must acquit’ saying? Do you think they could have made a better rhyme?
Christopher Darden: Well, quite honestly, I did not appreciate at the time the impact that little ditty had on the jurors. I thought it was a kids rhyme for idiots, to be honest, but it was effective.

3ach3r24: Do you feel OJ really put forth his best effort when trying on the glove? To me, it has always appeared that he bent his hand just enough to prevent the glove from sliding on.
Christopher Darden: Thank you. And no, he played around with it and tried to avoid making it fit. I hoped the jury would recognize that, but they couldn’t see it, because they didn’t want to see it.

brusty: What was your relationship like with Johnnie Cochran like after the OJ verdict?
Christopher Darden: When I began my solo practice as a criminal defense attorney, one of my first clients was a man referred to me by Johnny Cochrane.

FlashbackX: Is Fred Goldman’s mustache as intimidating in real life as it is on TV?
Christopher Darden: Fred’s mustache is created by God as the eighth wonder of the world, and there’s something about Fred, that when he talks, you want to listen. He is a straight-shooter. He never minces words. And he is as good a man as his mustache looks on television.

broncoblanco: Hi Christopher – had you been a criminal defense attorney at the time, would you have had a problem defending O.J.?
Christopher Darden: No.

Kymoff: Given your experience, what are your thoughts about television cameras in courtrooms? Do they help or hurt the justice system?
Christopher Darden: I think cameras in the court room are a mistake. I think they have a way of reducing a serious somber proceeding to a reality TV show and a mockery of what a trial ought to be.

Kymoff: Did Sterling K. Brown contact you or attempt to meet you before his portrayal in the most recent tv series?
Christopher Darden: He called me at 3am Pacific Time to tell me he had gotten the role. I chewed his ass out.

DinoTIme45: What actor has been your favorite portrayal of yourself on television?
Christopher Darden: I haven’t watched, but everyone says Sterling K. Brown is a better me than me.

notepadow: What advice would you give to other prosecutors trying similar high profile cases against celebrities? How can we preserve objectivity without making a mockery of the legal system?
Christopher Darden: I think that it’s important to have available to those prosecutors a mental health professional and someone to manage the media and social media. I think that will help a prosecutor stay grounded and focused. If it’s going to be a long trial – 8 moths, a year — I think it’s important to have a nutritionist available. By the time the Simpson case was over, I’d lost more than 20 pounds and 2 teeth, had 4 root canals, and God knows what else.

Ino_things: Is it true that OJ could come out publicly now and say “yes, I did it. I killed them both” and nothing could be done about it?
Christopher Darden: Yes, that is true. He has been found innocent, and to prosecute him again in state court would constitute double jeopardy and would be precluded by law. Did I say innocent? I meant not guilty.

bernaste_fourtwenty: You mentioned you were the prosecutor in the OJ Simpson case but that you now work as criminal defense attorney. What pushed that shift from prosecutor to defense attorney? Also, after OJ was found not guilty how did that effect your career moving forward?
Christopher Darden: I became a defense attorney after the district attorney’s office terminated my employment.

Ino_things: What are your thoughts about him recently making parole?
Christopher Darden: I fully expected that he would make parole. It was kind of nice seeing him in handcuffs and knowing he was in prison all those years, but I understand the Nevada parole board’s decision.

pogiface: If you were walking down the street and saw OJ or he approached you, how would you feel? What would you say?
Christopher Darden: I wouldn’t feel anything one way or the other. I sure as hell wouldn’t be afraid of him. I’d probably tell him to get the fuck off my sidewalk and take his ass across the street.

You can read Darden’s entire Reddit Ask Me Anything HERE.