Like Shooting Guns? You’ll Cream Your Shorts From This Insane $1,000 Gun Range Package 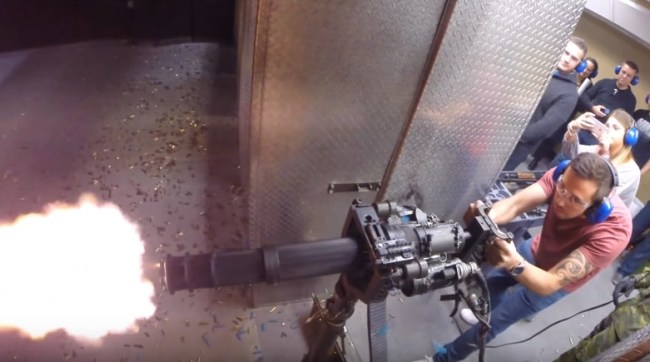 Imagine blasting some of the greatest firearms known to man? Now imagine using all of these wonderful toys in one shoulder-snapping, smoking-barrel shooting session? Thanks to the Battlefield Las Vegas Shooting Range you can!

From the trenches of World War I all the way to current operations in the Middle East, we have over 350 different weapons systems to choose from. From hand guns and pistols to fully automatic rifles, sub-machine guns to belt-feds and .50 calibers, we have it all here at Battlefield Vegas!

The shooting range offers a wide array of packages, many inspired from actual military battles, war movies, and first-person-shooter video games. There are packages ranging from D-Day 1944 to “Platoon” to Black Ops to Private Ryan to Modern War to Counter Strike to Hamburger Hill.

There is also allegedly a package that allows you to fire off hot lead from powerful firearms such as PDW, M16, MG42, M1 Garand, and even a gold AK-47 (Sorry, no Moonraker laser rifle). This experience costs $1,000, but there are much worse ways to blow a grand in Las Vegas, and shooting guns won’t give you gonorrhea.

The grande finale of this incredible gun extravaganza is the M134 Minigun, a six-barrel rotary machine gun that spits out over 4,000 rounds per minute.

They even have fucking tanks!!!