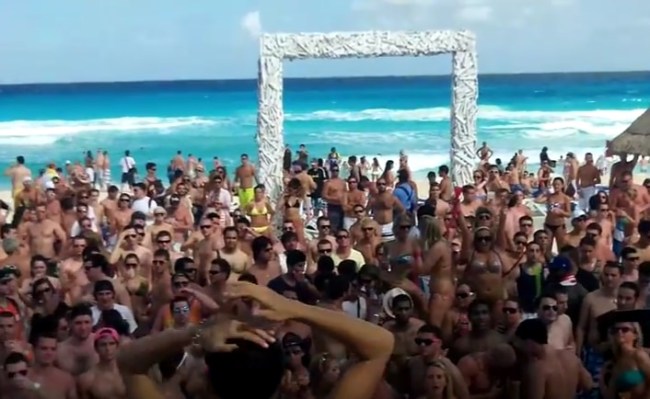 When America sends its people to Mexico during spring break, they’re not sending their best. We’re sending people that have lots of problems, and they’re bringing those problems to them. They’re bringing drugs. They’re bringing crime. They’re rapists. And some, I assume, are good people. But probably not this group of Americans that chanted “Build that wall” while on spring break in Mexico.

The Yucatan Times wrote an editorial calling out American spring breakers for their rude behavior while partying in Cancun.

Suly and Anaximandro Amable were in Cancun for their honeymoon on March 13 and went on a “pirate ship” performance boat. The booze cruise takes passengers out on the high waters for a pirate-themed show, complete with cannons and sword fights.

Posting on his Facebook, Amable wrote how some Americans acted on that cruise:

Today I was with Suly, my wife (who is a native of Mexico), watching an entertainment show off the coast of Cancun aboard a boat, and at the end of the show, a flock of Americans (maybe under the influence of alcohol, or maybe not), began to sing the infamous “Build that wall” chant louder and louder.

The paper reports that the Americans continued to chant one of Donald Trump’s most popular rallying cries, even after a number of Mexican passengers and workers complained.

The editorial added that this wasn’t a one-time thing.

This situation is far from being an isolated incident, and it adds to the growing number of complaints from tourism sector workers, who point out that in recent days many Spring Breakers have been offensive, rude and haughty towards Mexican people.

It’s just not a good look when you’re in a neighboring country and acting so very disrespectful to your gracious hosts. Plus those spring breakers are somewhat representing America, and not doing a very good job at it.

The bartenders on that ship are definitely going to make spitting in drinks great again.