Tyrannosaurus Rex Were Sensitive Lovers That Used Their Noses For Foreplay 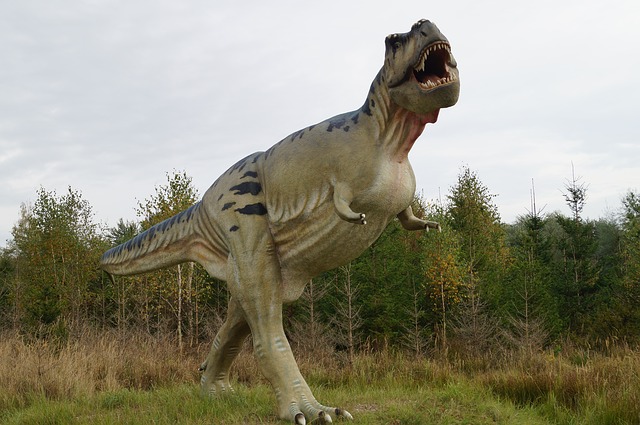 What do you think of when you think of Tyrannosaurus rex? Do you think of one of the most fearsome killing machines that has ever walked the Earth? But did you ever think that the T-Rex had a romantic side?

How I feel when the gf says Im sexy

The massive 40-foot-long apex predators that weighed 9-tons enjoyed rubbing their noses together in a sort of dino foreplay.

Paleontologists recently discovered unusually well-preserved fossils of the Daspletosaurus horneri (Horner’s frightful lizard) in Montana. D. horneri is a member of the tyrannosaur family, but lived before the T-Rex did (74 million years ago) and was smaller than it’s cousin (30-feet-long).

The US researchers wrote in the journal Scientific Reports: “In courtship, tyrannosaurids might have rubbed their sensitive faces together as a vital part of pre-copulatory play.”

Scientists believe the dinosaur and other tyrannosaurs including T. rex wore a mask of large, flat scales, with regions of tough and protective amour-like skin around the snout and jaws.

Strikingly, the hard surface of the snout was penetrated by numerous small nerve openings, or “foramina”.

These would have allowed hundreds of branches of the trigeminal nerve to access the surface of the snout, turning the dinosaur’s whole face into a super-sensitive third “hand”.

A similar arrangement is seen today in crocodiles and alligators, which have thousands of tiny sensitive bumps called integumentary sensory organs (ISOs) around their jaws.

Lead scientist Dr Thomas Carr, from Carthage College in Wisconsin, said: “Given that the foramina are identical in tyrannosaurs indicates that they had super-sensitive skin as well.”

So the Tyrannosaurus rex got turned on by rubbing their noses like Eskimo kisses. Awww!!!

The T-Rex had to be romantic during lovemaking since they are lacking in other areas.

I guess this is nature’s way of helping a T-Rex get off since they’re not very handy at percolating their mate with hot and sexy nipple play.

“Our finding of a complex sensory web is especially interesting because it is derived from the trigeminal nerve which has an extraordinary evolutionary history of developing into wildly different ‘sixth senses’ in different vertebrates,” said Professor Jayc Sedlmayr, from Louisiana State University. This sixth sense would have given the Tyrannosaurus rex a keen hunting ability to stalk its prey.

Besides nostril foreplay, the T-Rex also used their sexy schnoz to “investigate their surroundings, build nests, and carefully pick up fragile eggs and baby offspring.”

What do you call a female T-Rex who has sex with a well-endowed male T-Rex?