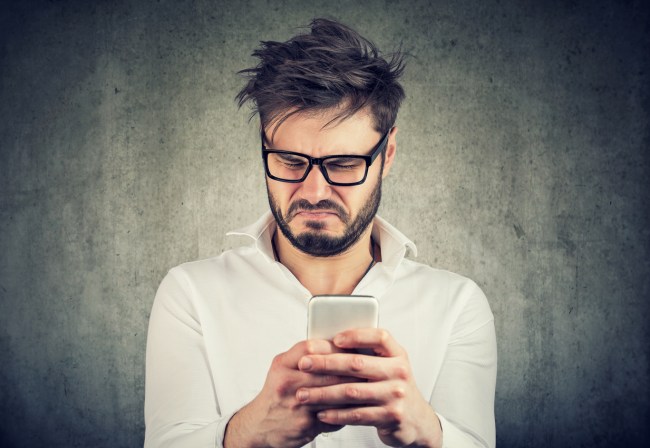 None of us have escaped the Age of Technology without some blood being shed somewhere along the road. Advances in technology, especially when it comes to the phone, have certainly changed the game when it comes to talking to a lady but it’s not as if those changes have all been for the best. Whether it’s a full-fledged relationship or just a good old fashion fuck buddy, having a cell phone has worked to your disadvantage at least once.

Now, I don’t mean actual bloodshed has come from this dependency on technology. Although I’m sure if it has, there’s a podcast about it out there somewhere. Instead, what I’m talking about is how communication has disintegrated to the point that breakdowns have become so commonplace that you’re guaranteed to experience one or more with every female you interact with at some point. It’s science.

The result of such a breakdown is a series of confused reactions that would be completely abated if you just picked up and dialed the person rather than text them. I know, what a concept, huh? Using the phone as a phone. It’s wild shit, to say the least. But sometimes you can’t simply rely on texting or communicating through social media. Sometimes you need to actually talk the person to either get things straightened out, wrong a right, or come clean about a wrong that she might not know is a wrong yet but will soon, and damn it, man, you need to get ahead of it.

Here are five situations where you MUST call a female and most definitely not text them.

If You Sense Her Interest Is Declining

So if you sense that the female in question’s interest in you is starting to decline to the point where she might be seeing other guys on the nights you’re not together or just straight up not interested in seeing you on any night, then it’s probably a good time to get off your ass and make a phone call. Stop trying to be the cool hairdo kid that puts in limited effort with females and doesn’t give two fucks about anything in life. That might work in the movies friend, but it doesn’t work in real life.

At the end of the day, if we can all agree on one thing, it’s that we like getting laid. Again, it’s science. But no sir, that won’t be happening for much longer if you refuse to put forth the most minimal effort there is and call her and ask how her day is going. I know, it sounds like a daunting challenge speaking words and stuff, but it really could salvage whatever it is that you have going with her.

If You Two Are Having A Dispute

Couples that try to settle arguments through text messaging or through social media always provide great entertainment. Well, provided you yourself are not directly involved. I’d be lying if I said they brought me any real enjoyment though. Ultimately, they just piss me off like no other situation I can think of, but I digress.

If you’re in a relationship with a gal and you’re going back and forth bantering about something serious via text, then its a good idea just to give her a call and try to make amends like people did for the last 100 years. I understand that we live in a more advanced, higher-paced world today and as a result, we’re generally doing multiple things at once, thus making texting or sending a quick message via social media easier. However, that doesn’t mean we should eschew the basic foundations of human communication. I mean, we’re not savages for crying out loud.

Abandoning face-to-face or voice-to-voice conversations is a dangerous idea for a plethora of reasons. Chiefly, it eliminates the ability to actually clarify what you meant in text messages, which continuously fail to convey parts of speech like sarcasm. Imagine living in a world where what you texted a friend – not even a girlfriend – would be the end-all and be-all? You’d probably have a lot fewer friends.

Yes, texting is ultra-convenient and absolutely more efficient than waiting for someone to call you back. But if you’re already engaged in a spat, then the chances are that person will answer your call. If they don’t, then it really just highlights their level of maturity and might be the green light for you to move on. Or son, you done really fucked up and it might be time to look into local florists. Either way, some times the written word isn’t going to cut it and being in a dispute is one of those times.

This one seems obvious but you’d be surprised how many long-distance relationships are held together through text or social media as opposed to standard phone conversations. Not only does this constant communication, which can run from sunrise to sun down dilute any element of surprise, it also makes talking to that person mundane to the point where there isn’t even a conversation taking place; rather, just a Twitter-like news feed of updates.

“I went to the mall today”

“I had drinks with Chris after work,”

“I’m waking up at 6 tomorrow for my class”

Enough already! It’s enough to make me sick just thinking about it.

The last point here, I promise: if your significant other is traveling, whether it’s as close as Kansas City or as far as Beijing, then it’s a good idea to call them and make sure everything is OK. Not only are they extremely lonely and vulnerable, and want to be reminded that someone cares for them back home, but there’s also the offhand chance they’re in a situation that is making them feel uncomfortable, like witnessing a murder or something.

If You Or She Are In Distress

If you happen to be feeling uncomfortable — say, walking down a dark city street at two in the morning, then it’s probably not the worst idea to give her a call. Will she be irked? Yeah, maybe, especially if she’s sleeping. But I’m sure she’d understand your circumstances. There’s potential danger involved! After all, if the roles were reversed, and she was the one calling you, then you’d probably not think much of it and answer her call because YOU ARE A GOOD DUDE WHO WOULD DO THAT KIND OF THING, RIGHT?

Now, I’m not saying all guys should depend on calling their girlfriends when they get scared, but when they get scared ENOUGH, to the point where they think a mugging is imminent, then it’s a situation where a call will do you a lot more good then a text message. What is she going to be able to tell the cops if the worst does happen? “The last I heard from him he texted me: about to be robed, I’ll talk to you later.”

That doesn’t really help narrow down the list of suspects and it certainly doesn’t say where you are. A call will not only cover both of those in a matter of seconds, but it will also give her and the cops a legitimate reason to be concerned; whereas, with a text, it could easily be misread as a prank.

Plus, it’s really hard to text when running and we run when we’re scared. Again, mother fucking science, y’all.

If It’s The Holidays

I can’t stress this one enough — if it is a major holiday, like Christmas or National Donut Day, you call your girlfriend, your booty call or even the chick two doors down from you that gives you the eye occasionally and you’re semi-interested in. Why? Because she’s 100% going to be with her family and she, like the rest of us, will welcome the break from the constant dialogue with the relatives. You’re doing a heroic act and doing heroic acts is dope.

Most importantly, just like how calling her and asking her how her day went, calling on a holiday will earn you major brownie points. It will show her that you really care. In all honesty, any dingbat with thumbs can text a female to wish her a happy Thanksgiving, but you can really separate yourself from the crowd with a phone call on a major holiday or even when she’s just stuck with family for the weekend.

Even if she doesn’t answer, the effort is what matters here — not the results, which are practically guaranteed the next time you see her.