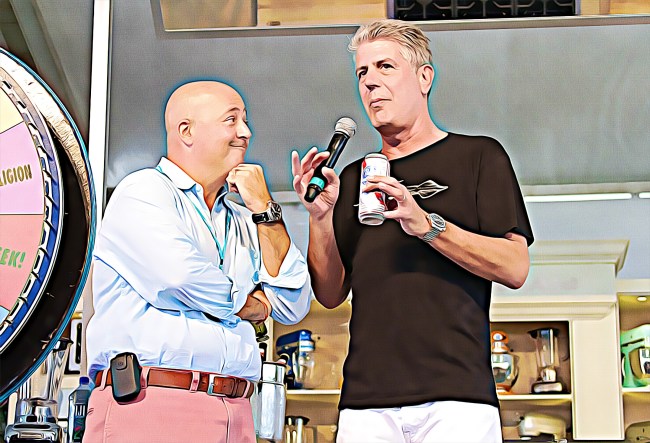 Andrew Zimmern is a four-time Beard Award-winning chef, Emmy winner, and one of the most influential food authorities on the planet.

We got the opportunity to sit down with the culinary icon on our Endless Hustle to chat about his unlikely journey to stardom, pineapples on pizza, ultimate hangover meals, and the trajectory of the restaurant industry post-pandemic.

Zimmern also pulled the curtain back on his late friend and colleague Anthony Bourdain, whose gifts he was as awed by as the rest of us.

“I think Tony was telling the truth for so many people with an irreverence and intelligence. He can convince anyone who disagreed with him that he was an authority. It didn’t hurt that he was the most magnetic personality on two feet that I’d ever come across in my 59 years on the planet.

I would walk into rooms with him and I could see his discomfort realizing every woman wanted to schtup him, every guy wanted to be his best friend. That weight, at times for him was crushing.”

Culinary legend @andrewzimmern offers his fail-proof hangover cure and opens up about the magic of Bourdain.

Zimmern also offered a slight variation to Bourdain’s fail-proof hangover cure of aspirin, a cold Coca-Cola, a joint, and spicy Sichuan food. Here was Zimmern’s before getting sober:

“When I was using and I was coming out of blackout every 2-3 days, I would do a beer, half a joint, some aspirin, two Cokes over ice in a quart plastic tub. That was my huge go-to.”

The 59-year-old also gave the most convincing case for pineapples on pizza these ears have ever heard.

🍍🍕 PINEAPPLE PIZZA: The verdict has been reached. 🍍🍕

Culinary legend @andrewzimmern's case for the merits of pineapple pizza is impossible to argue. We tried.

“[Pineapple pizza] is delicious, especially with salty meats. Salty, spicy, sweet, and sour is the holy quartet of flavor combinations in many cultures.

If you have a thinly shaved Calabrian sausage is actually my favorite, and you have paper thin shavings of pineapple, so they caramelize really quickly on a good Neapolitan-style pizza—90 seconds in the wood-burning oven, in out—that to me is one of the great pizzas of all time and I don’t think it should be poo-pooed.”

Listen to our entire interview with Zimmern below: