Baron Davis Compares John Stockton To Tom Brady, Says Getting Dominated By Stock Was Like Being In ‘The Matrix’ 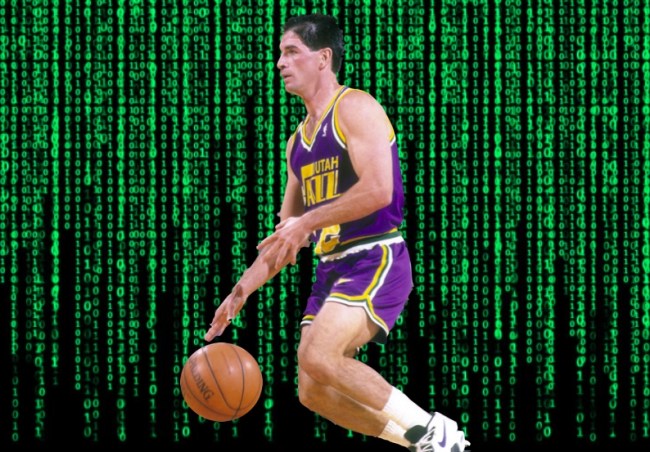 John Stockton may be the best player in NBA history that I’m not sure is currently dead or alive.

Stock just terrorized the league for two decades and then disappeared like Andy Dufresne from Shawshank, without leaving  Malone a single breadcrumb to find him on the small Mexican fishing village of Zihuatenejo. Dude probably goes by ‘Jonathan’ now and only works up a sweat when he’s restoring old boats with Tupac.

NBA legend John Stockton, all time leader in NBA history for assists (15,806) and steals (3,265), doesn’t even could get noticed on the public streets of Barcelona during the 1992 Olympics. The ultimate #WhiteBballPains pic.twitter.com/nBLp4Rkwen

This begs the question: Will Stock’s legacy evaporate with future generations because he doesn’t own a TikTok account or a collared shirt?

Baron Davis will not let that happen.

Davis appeared on our Endless Hustle podcast (subscribe or die) to describe how underestimating John Stockton when he got into the league was a very bad strategic decision. Keep in mind, when Baron entered the league in ’99, Stockton was in his 16th season. He was 37.

.@BaronDavis compares John Stockton to Tom Brady and says his 'Welcome to the NBA' moment was getting mercilessly dominated by Stock.

“He was just science. He was tactical, dude. Everything he did had a purpose.

He’s not even worried. He gets me all the way to the bottom of the free-throw line. I think I’m sweating, I’m playing defense and he just walks me down, walk off the pick-and-roll. It was just frustrating because he had it down to a science.

And then we take the ball out. I’m running to push it towards him. Soon as I catch the ball, I put the ball down, and he steals the ball. I’m like, ‘God damn, where this motherf*cka come from?’ He was like THAT.

Ask any NBA player and they’d tell you, like, damn where did he come from? He’s the all-time steals leader.

He don’t talk shit. He’s tough. He plays the game. He’s talking to his players, he’s a leader. And that’s what I learned from Stockton, like this shit is a science.

Everyone else after that with John Stockton was like, ‘Yo, am I in the Matrix?’ 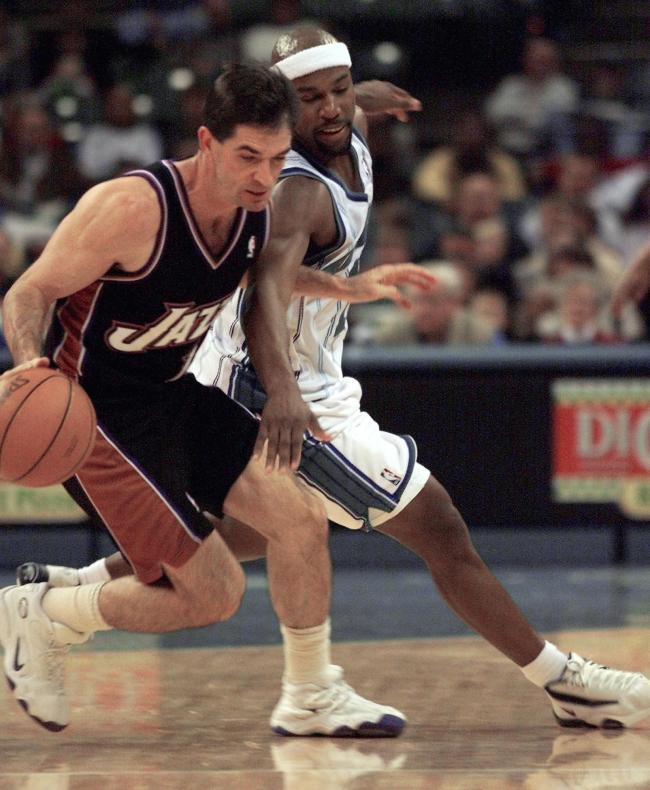 Davis then had a flashback to his first in-game encounter with Stockton, a short-lived one because Stock had twisted him into a pretzel.

“I was on the bench so fast. I was in the game for like two minutes. All my life I got my certain amount of minutes and I was on the bench in two minutes with three turnovers. And he stole the ball two out of the three times and made me turn it over a third time. That was devastating, to be frank.

He was like Tom Brady to me in basketball. He didn’t win a championship, but he’s one of them Tom Brady, Peyton Manning, precision passers. Just like, you don’t think I got a lot of mobility but I’ll tear your ass up.”

Stock, if you’re reading this in your straw hut overlooking the Pacific, take comfort knowing that your legacy will live on and that Jordan pushed off.

Listen to our entire interview with point God Baron Davis below. We discuss Jordan dropping 51 on him when MJ was 38 years old, choosing UCLA over Duke, posterizing Vin Baker and AK-47, and much more. We love him. You will too.