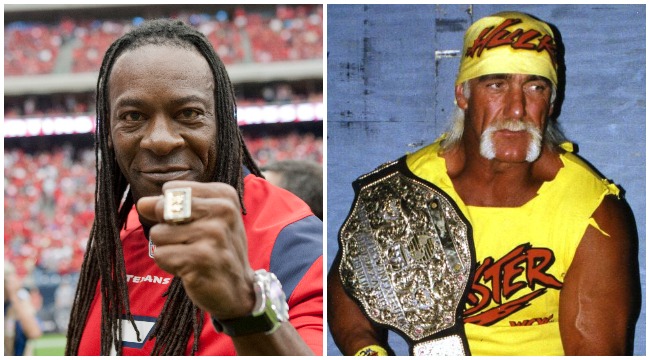 And all my dumb ass can do is ask Booker T about something that happened two decades ago, an incident that he referred to as “the worst moment” of his entire life. #Journalism.

Booker, then in his early 30s and the prime of his career, dropped in n-bomb directed at Hulk Hogan on live television during a Spring Stampede pay-per-view promo in 1997, and in the video you can literally see King Booker looking his resume over in his head to determine what needs updating for future opportunities.

I watch Bill Burr’s recollection of it after bad days.

Booker addressed the incident on our Endless Hustle podcast after claiming he’d never spoken to Hogan about it until 20 years later because Hulk was so mad Booker beat him to it boom roasted.

(If you thought I was going to write a Hulk n-word story without a proper ribbing, we’ve never met. And don’t you dare feel bad for a guy who won $31 million simply for banging his best friend’s wife.

“Ya know I’m from the neighborhood. The hood came out of me there for a second.

And I realized at that moment. The thing is, none of my peers have ever heard me say that word before or after that moment.

I felt like I let so many of my people down when I said that because I always looked at myself as respected. So many young people looking at me and a lot of young people took that and made it an anthem and I’m like, ‘No, that’s not an anthem. That’s not the way we talk.’

And that’s why I felt like I let so many young people down when that happened and that’s what I was thinking in that moment. Thank God we wasn’t living in the social media era or perhaps you and I would not be having this conversation.”

Talk about a dude with an ability to assess all sides of a situation before deciding how to feel about it. What a lost art.

Listen to our entire interview with Booker T & Sharmell below, where we discuss Pat McAfee turning him into a believer, vintage Ric Flair stories, the best wrestler he’s worked with, his Reality of Wrestling promotion, and more.