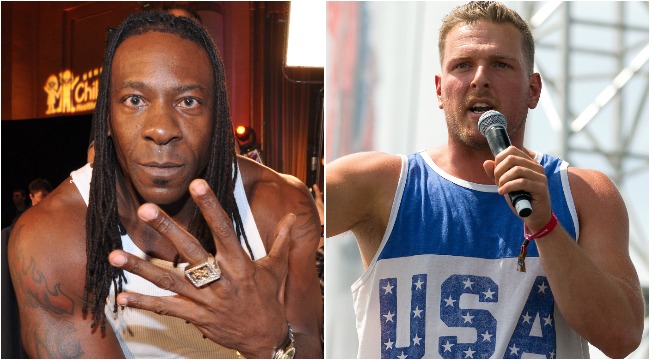 If you would’ve told me 10 years ago that Ellen Degeneres would be a threat to society and the most influential player to emerge from the NFL was a punter, I would’ve asked you to share your narcotics. No one likes a drug hoarder. Empty your pockets and spread your buttcheeks.

But we must never forget to treat the future like a fart and never trust it, because it can be a fickle little monster.

McAfee parlayed his Pro Bowl + Punter of the Decade football gig into a career as one of the top sports media personalities in America and a respected figure in professional wrestling. Meanwhile, I haven’t trimmed my pubes since Valentine’s Day because my trimmer’s battery died. At this point, power tools are required.

We spoke with WWE Hall of Famer Booker T and Queen Sharmell on our Endless Hustle Podcast (subscribe or die) about whether or not athletes from difference sports—Rodman, Malone, Gronk—dipping their toes into the wrestling waters creates any tension with those who’ve committed their lives to it.

Booker claims he never had a problem with high-profile appearances because it pumped his wallet. Turns out being around Dennis Rodman, strippers, and mountains of blow ain’t so bad when you’re getting paid for it. Twist my arm.

In setting Pat McAfee as the gold standard for outsiders, Booker then paid McAfee just about the best compliment you can get from a five-time champion.

WWE royalty @BookerT5x revealing how @PatMcAfeeShow turned him from doubter to believer to fan during his time in the wrestling world is a dope story from our @Endless__Hustle pod.

"At the beginning I was like, 'Man, I've never seen a kicker get into a fight.'" pic.twitter.com/L0oTUsBDvO

“For instance with Pat McAfee came in and did his deal with Adam Cole. At the beginning, I was like, ‘Man, I’ve never seen a kicker get into a fight. What does this guy know about going out and throwing hands?’

And then he went out and did a hell of a job and I’m like, ‘Wow, man.’ He won me over. But at the beginning I didn’t feel that way about him.

When it fits, when it works, go with it.

The thing that him and Adam Cole did on the Pat McAfee Show, it was real because I bought it! I was like, ‘Wow they hooked me, man. They got me real good on that one!’

Below I’ve embedded the Adam Cole/McAfee Show promo that went viral in July, and somehow did not win an Oscar. To this day, I’m not entirely sure whether this was real or staged and I’d like to keep it that way.

Listen to our entire interview with Booker T & Sharmell below, where we discuss his relationship with Hulk Hogan after he called Hulk the n-word on national television, vintage Ric Flair stories, the best wrestler he’s worked with, his Reality of Wrestling promotion, and more.