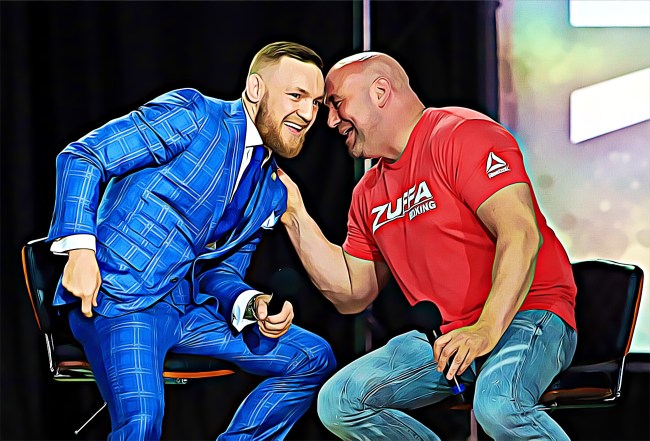 When Conor McGregor was a wee little lad in 2004, two years before he commenced a plumbing apprenticeship in Dublin, the 16-year-old attended his first UFC event as a fan.

McGregor claimed this was the very first time he met UFC President Dana White, running “down the railing” after the event and proceeding to ask White how much money he had on him.

“He looked at me. ‘How much money have you got in your pocket right now this second?’

“He looked at me with like a weird face and then just kind of walked off! I don’t think he liked that too much.”

Any humiliation Conor felt from this interaction should evaporate with the knowledge that White has zero recollection of this, and believes he first met his company’s Golden Boy at a dinner before signing Conor to a multi-fight contract in 2013.

We spoke with White on our Endless Hustle about who Conor McGregor was before the success and notoriety.

"I don't know if this kid can fight or not, but if he can even throw a punch, he's going to be a massive superstar…The closest thing to it was Ronda."

“He flew to Vegas and he and I went to dinner. When I left that dinner, I called my partner, Lorenzo, and I said, ‘Let me tell you what. I don’t know if this kid can fight or not, but if he can even throw a punch, he’s going to be a massive superstar. I knew it that night when I was with him.

His personality. The energy around this kid. I’d never met anybody like him.”

White then claimed that the closest thing to Conor’s initial charisma and star power was UFC Hall of Famer Ronda Rousey.

“I sat down and had a 45 minute meeting with her, and I was adamantly opposed to women fighting in the UFC. Halfway through the meeting I started talking to myself going, ‘Holy shit I think I’m going to do this. She’s the one. She’s the one we can launch this whole women’s thing with.’

BOXING vs. UFC@danawhite on why @UFC has ballooned over the past 15 years while boxing has failed to make significant strides.

"Boxing has the same old story."

Check out our entire interview with UFC President Dana White below: