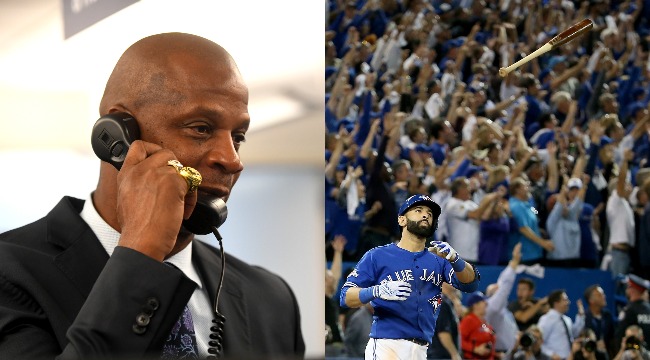 I’ve said it before and I’ll say it again, if you don’t live in Texas and you were offended by Jose Bautista’s bat flip—or any bat flip for that matter—you have a huge doodie in your pants and probably eat Reduced Fat Cheez-Its.

Baseball’s “Unwritten Rules” have been a hot topic in baseball circles as of late and the two schools of thought can be broken out into two camps: The Purists and The Fucks Its.

We invited four-time World Series champ Darryl Strawberry on our Endless Hustle Show to find out which team he belongs to, breaking down a series of baseball’s unwritten no-nos.

“I can’t get behind the bat flip. That’s just totally overrated. If you did that to Nolan Ryan, he’s going to drill you the next time up, there’s no question about it. He’s old school. Guys I played against was old school. They didn’t play that. You better march on along that base.

BUNT ON A NO HITTER

“You definitely don’t bunt on a no-hitter. Don’t try to ruin a guy’s game with a bunt, base hit or something like that.”

WALKING IN FRONT OF THE CATCHER

“You can get away with doing that because catchers have a tendency to talk a lot and running their mouths sometimes and you just want to shut them up.”

For context: Buster Posey lost his 2011 season after suffering a fractured fibula and torn ligaments in his ankle from a Scott Cousins slide. The collision led Major League Baseball to adopt rule 7.13, informally known as the Buster Posey Rule, which states that “a runner attempting to score may not deviate from his direct pathway to the plate in order to initiate contact with the catcher (or other player covering home plate).”

“Posey got his leg broken for being over the plate like that and a hard slide in [by Scott Cousins]. It was a clean slide. You cover the plate, things are going to happen.”

“Breaking up a double play. I guess a kid got his leg broken for the Mets. That’s just part of it. You stay on that bag your leg gets broken. And those are the things I can live with.”

With all due respect to Mr. Strawberry, how is a broken leg totally chill but bat flips are the work of the devil?

Tune into our entire fascinating interview with Straw below. We discuss his wild and turbulent journey in the MLB, the Astros cheating scandal, Negro League stats being rolled up into the MLB, Mets management, and much more!