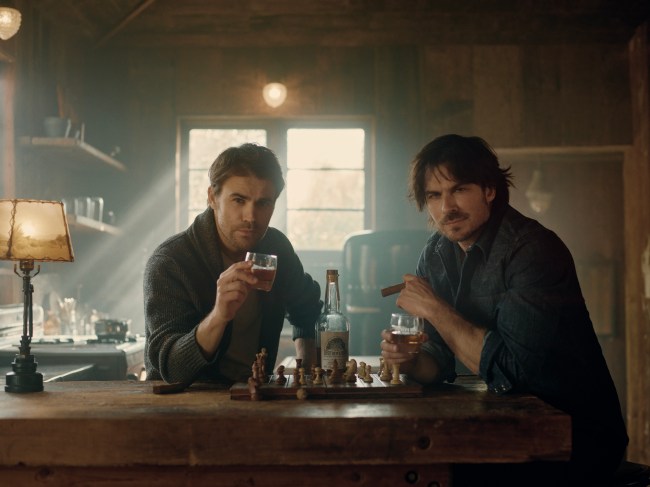 For eight years and nine seasons between 2009-2017, the pair’s Vampire Diaries characters, Damon and Stefan Salvatore, sipped whiskey at a Mad Men clip presumably to overcome the stress of being 162-year-old vampires in a rural Virginia town. Understandable, especially from a guy who sips whiskey in public settings when he’s self-conscious about a new shirt.

The libations, which Paul recently admitted to us was actually “iced tea” (most of the time), poured so freely on the show that many viewers were drawn to the bottle like a fly to a flame.

Now, after a full year of blending various bourbon profiles in Somerhalder’s living room, the friends are manifesting their brotherhood off the screen and straight into your favorite snifter with the release of high-rye Brother’s Bond Bourbon.

The above post is from May 2020 when Ian introduced the liquor’s Vampire Diaries-inspired name and fans went so bananas that they crashed the brand’s website, hundreds of thousands of them, Ian claimed at the time.

We sipped some Brother’s with the boys on our Endless Hustle and it became very clear that this project is a 10-year labor of love and not just a couple of hunky celebs slapping their names on a label and depositing a check.

Be The Brand. @iansomerhalder and @paulwesley on creating @BondBourbon and refusing to just slap their names on it and skate off their influence.

"It's not celebrity-driven. It's celebrity owned."

“It’s not celebrity-driven, it’s celebrity-owned,” Ian said. “I was on calls at 7:00 am this morning with our trademark attorney talking about our trademark in India…we put our souls into these bottles.”

Paul added: “The Mark Cuban rules of success: Do not start a business unless you are passionate about it. Unless it’s an obsession. He used the word obsession. I would never want to be a part of a company I wasn’t obsessed with or that I didn’t believe in. I can’t imagine doing interviews like this if I hated this or I didn’t believe in it.

Is there another these dudes can’t do?

Just don't ask him to throw a football 😂 @iansomerhalder explains.

Check out our full interview with Paul and Ian below: