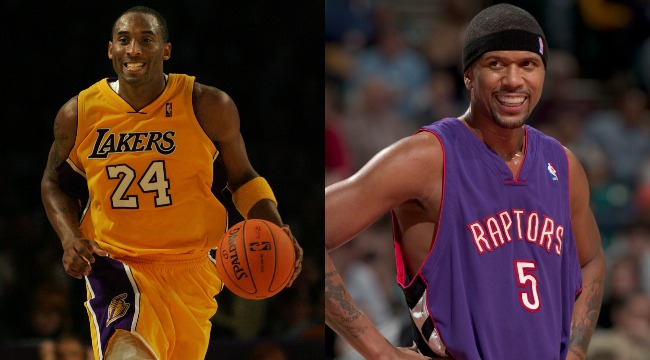 Fifteen years ago today, Kobe Bean Bryant scored a career-high 81 points in a 122–104 win against the Toronto Raptors in what remains arguably the most impressive single-player performance in the 75-year history of the NBA. (Judges will also accept Wilt Chamberlain’s 100-point game in 1962).

The showing was so moving for those in attendance that teammates and staff alike were asking Bryant to autograph copies of the box score after the game, according to NBA.com, and then-Lakers owner Jerry Buss described the game as “like watching a miracle unfold.”

Jalen Rose had the pleasure(?) of being victimized by the miracle while playing with the Raptors on the tail-end of his career.

Rose recently joined our Endless Hustle Podcast presented by Boston Market to reveal how he views the performance nearly a decade-and-a-half removed from it.

Jalen could have mentioned the fact that Kobe only scored 18 points when he was guarding him, but instead decided to recognize Greatness like the rest of us admiring fans.

Kobe Bryant dropped 81 on Jalen Rose & the Raptors in one of the most dominating single-player performances ever.

Today, @JalenRose is fine with being "teased" about it because his name is forever attached to Greatness.

When asked who the toughest cover was of his 14-year NBA career, Jalen didn’t hesitate.

“I got to say Kobe because I was out there and watched that 81 up close and personal. And I want to pay homage to the legend and uphold his legacy and celebrate the fact that I got to see greatness and get teased about it and get the chance to talk about it. And when his name comes up, at some point, five words later, my name is going to come up. And I appreciate everything that he was able to accomplish on this earth. And so, probably that.”

Listen to our entire interview with Jalen Rose below.