Jerry Ferrara Sits Down With The Brilliantly Dumb Show To Talk ‘Entourage,’ The Knicks And More 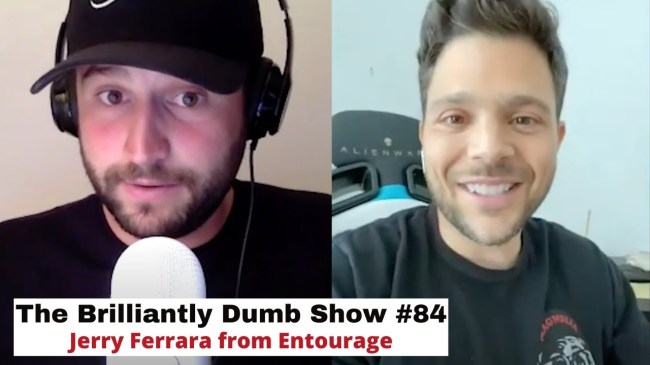 Another episode is in the books for The Brilliantly Dumb Show as we sat down with ‘Entourage’s’ very own Jerry Ferrara. Ferrara, who played the role of ‘Turtle’ has seen tremendous success throughout his career even after the HBO hit show, which casually had 8 seasons and a movie.

Ferrara has linked up with guys like Mark Wahlberg on the set of numerous movies such as ‘Lone Survivor’ and more. He spoke in detail on what life was like on the set of ‘Entourage’ and his thoughts on why the show was able to have so much success year after year. The cast members, such as Kevin Dillon, Kevin Connolly, and Adrian Grenier, instantly became his closest friends, which is why Ferrara described the casting for the show as “the perfect storm.”

A lot of people know Ferrara for his love of New York sports, especially when it comes to the Knicks. It is almost a guarantee that if you are watching some New York Knicks basketball over the past 10 years, somewhere in Madison Square Garden you will see Ferrara in the stands. We touched on his frustration level of the franchise and much more.