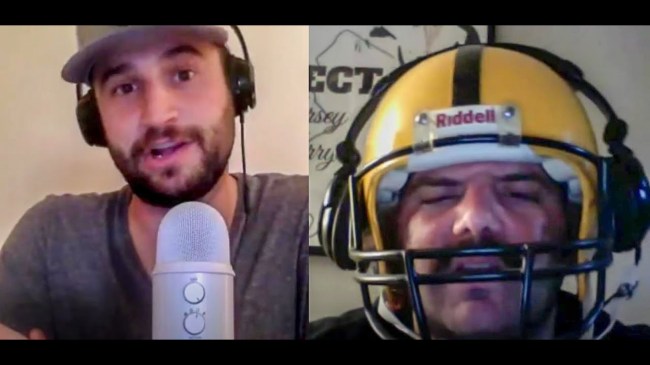 It’s hard to predict what anybody from New Jersey is ever going to do or say. Most Jersey residents either have very little or no filter at all. And the unpredictability is exactly what I love about the Tri-State area and its people. Nobody fits the Jersey image though more than a guy who goes by the name ‘Jersey Jerry.’ J

Jerry has been a regular on The Brilliantly Dumb Show and is competing for his own segment by trying to pick 7 out of 10 sports bets correct with our friends at BetMGM. He has been an instant hit with the fans of the show, so much so to where he is starting to receive fan mail. It was on the air the other day for episode No. 97 when Jerry was moved to actual tears over 2 loaves of sourdough bread.

It is hard to root against a guy who appreciates a good sourdough and a  “cinny raisin” loaf as much as Jersey Jerry does. He couldn’t help but shed a few tears and sniffles as he read the letter from the baker that had made and sent the loaves to the Jersey native himself.

Jerry was able to wipe those tears away and proceed to give the show a lock of a pick on UFC fighter Mackenzie Dearn who proceeded to force her opponent Randa Markos into a first-round submission. That submission led Jerry to a 4-3 record in his quest for his own segment on The Brilliantly Dumb Show. It was just another small glimpse of what makes Jerry so great and why we can’t help but come back for more to see what he is going to do or say next.

For Jerry’s next pick, be sure to subscribe to The Brilliantly Dumb Show on YouTube and all other podcast streaming platforms.