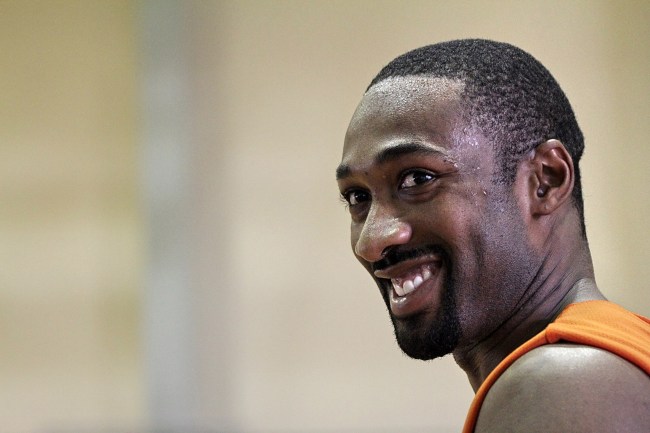 Every friend group has a Gilbert Arenas. A total wildcard. The guy who your parents forbid you from hanging out with, but you are powerless. You are already tied up in the web. Committed to the car crash. The kind of guy who makes you scared to have daughters.

I mean, you don’t earn the nickname No Chill Gil by NOT bringing a firearm into a professional setting over a card game.

There is no one on the planet who knows the depths of Agent Zero’s craziness more than his college teammate and longtime friend, Richard Jefferson.

Jefferson appeared on our Endless Hustle Podcast this week and pulled the curtain back on a guy he admits is the most batshit crazy teammate he’s ever had in his near two-decade long basketball career.

RJ’s first Gilbert story harkens back to the late 90s when they were teammates at the University of Arizona.

“So Family Weekend, we’re driving in his car and all of the sudden he’s like, ‘Hey Richard, watch this.’

He puts on a DVD and he has a crazy sound system. Again this was the late 90s, early 2000s. Everybody was bumping.

And he starts playing some inappropriate videos at the maximum volume his car will go. It’s just like tons of people around and I’m literally trying to recline the seat so no one can see me. He rolls down the windows and puts the child lock on so it’s just blaring out of his windows and everyone is looking on.

Finally, I rolled up the window and then when he put the child lock on I reclined the seat. Ladies and gentlemen, you can imagine the type of video he’s playing. But this is what he used to do just driving through campus!”

If you thought Gilbert matured in the 20 years since, here is an anecdote from just last year that I thought would slap hardest in documentary form.

“Gilbert’s so nice but you always gotta worry a little bit. And like just to give you an example of Gilbert. So they knew we were both going to be on [First Take] and I say this legitimately: Gilbert sat with the producer trying to figure out all the words he could and couldn’t say.

Listen to our entire Endless Hustle interview with Richard Jefferson below. We discuss his 17-year NBA career, how winning Bronze in the Olympics changed U.S.A. basketball, The Redeem Team, how LeBron gets when he’s riding a wine drunk, being bald, and more!