Ryan Leaf Claims Peyton Manning Was One Of The Few People Who Never Betrayed Him, Reveals Players Who Tried Most To Mentor Him 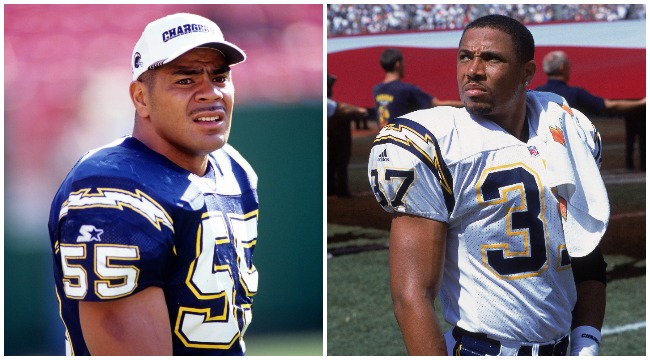 But Leaf’s self-admitted biggest failure was refusing to take advice or mentorship from those invested in his success.

Bobby Beathard, the Chargers’ general manager during the 1990s, said this of Leaf to ESPN in 2008:

“Guys can be jerks, but I’ve never seen a guy that worked harder at alienating his teammates,” Beathard said. “Junior Seau, Rodney Harrison, they came to me and said, ‘Bobby, this guy is killing me.'”

The 44-year-old ex-QB appeared on our Endless Hustle podcast recently to speak on former Charger teammates Rodney Harrison and Junior Seau, two players in his career who tried to mentor him most.

.@RyanDLeaf says @Rodney_Harrison & #JuniorSeau tried to take him under their wing when he was really going through it.

Was there a player when you were going through this shit who put his arm around you and tried to get you right?

“Rodney Harrison. Rodney really tried. I didn’t listen. I really didn’t. I got paid more, I was the star.

Junior Seau really tried as well. Both those guys really tried to take me under their wing and I didn’t do it. That’s my fault for sure because they were the epitome of what a pro player should be and how to go about their business and I really think if I would have just surrendered and accepted their help on how to be a professional, things would have been different because they tried. That’s why I think it hurt so much when I failed, so poorly, and left. Some of the things they said when I left because they wanted me to succeed, of course they did, and I chose not to. Or I chose to at least listen about how to go about things.

Unfortunately, Junior isn’t here with us anymore for me to apologize to that and make amends but Rodney is. Him and I have really reconnected and it’s pushed our relationship to a different place as adults, as guys who no longer have football to play anymore and be successful at. There’s always time for that.

Antonio Brown, and I reached out to AB when all of this went down too. He wasn’t hearing it. Luckily, he needed someone on his level, who he thought was on his level and that may be Tom Brady. He seems to have listened to Tom Brady, and that’s meaningful.” 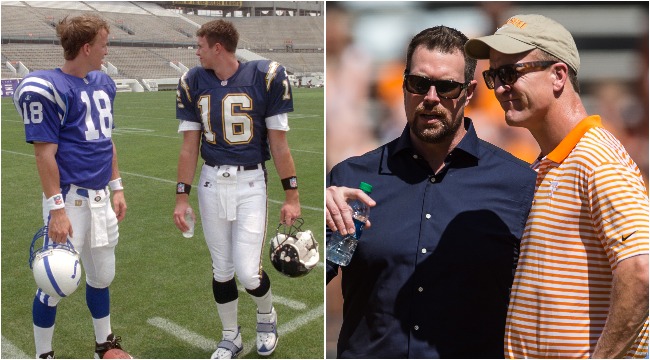 Leaf also spoke about Peyton Manning, the only player selected before him in the 1998 NFL Draft. He said that while he was initially star-struck by Peyton, he grew resentful of his Golden Boy persona, which is why he leaned into the “Dennis Rodman” identity. Ultimately, Peyton and his family were some of the only ones who never turned their back on him, even when he was locked up.

“We went through the whole draft process together. I think I probably came to resent him a little bit just because people considered him the Golden Boy and me kind of the black hat. And I ran with that, I thought I could be the Dennis Rodman part of it, as long as I did what I always had done, compete and win. I should have probably just told people, ‘Hey, Peyton and I are a lot alike. We’re both country boys who get to do what we love and when you guys tell me I’m bad it reminds me a lot of my youth and  it makes me feel bad.’

But you’re just never vulnerable and transparent like that. Peyton always understood that, and sure enough, when things got really bad for me, when a lot of people just walked away from me, he never did. His family never did. Olivia and Archie, they reached out to my family. Nowadays it’s texts from time-to-time.”

Listen to our entire inspiring interview with Ryan Leaf below (also, subscribe and review to the pod, it’s the holiday season!).