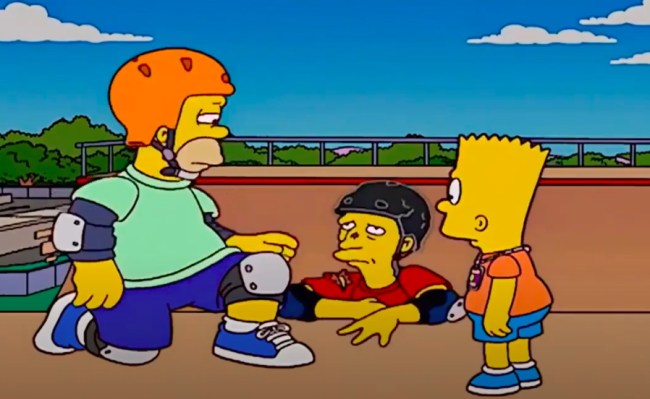 Tony Hawk was earning six-figures as a teenager, bought a house when he was 17, was featured as a skater-double for Josh Brolin in the movie Thrashin’ the following year, and became the first human ever to land a 900.

Still, the skateboarding legend’s I Made It moment was being featured in on the three-hundred-and-second episode of a cartoon.

Hawk voiced himself in the eleventh episode of season 14 in 2003 in an episode called ‘Barting Over,’ in which he is introduced to Bart for throwing a party with Blink-182 in the building Bart moved into after getting in a fight with Homer. Bart and Tony become quick friends and Homer ultimately convinces Tony to lose to him in a skateboarding contest so Bart can be proud of his father again.

Tony joined our Endless Hustle podcast (subscribe one time) and immediately responded to his I Made It moment with his 2003 appearance on The Simpsons. It is obvious Tony is still beaming from it.

"Being on @TheSimpsons. That was it. That was definitely the high mark of acceptance" – @tonyhawk shares when he knew he finally made it & more on the brand new episode of #EndlessHustle out now!

“Being on The Simpsons. That was definitely the high mark of acceptance. I mean, jeez, what a dream. I literally got to star in an episode with Bart.

It was like 2000 or 2001, I had a publicist. I had recently gotten one because suddenly I felt like all this press and things that I couldn’t really navigate myself. She said, ‘Oh, I’m going to pitch you to shows. Behind the scenes, she pitched me to The Simpsons. I didn’t realize that and the next thing I know, she sends me a script. Like a full episode.

She said, ‘Hey, The Simpsons want you to star in an episode. Here’s the script. Can you make this work?’

I was like, ‘Yes, anytime. Anyhow, I can make that work.’

My first reaction [upon seeing the episode] was, do they think I’m bald?? And the second reaction was, it was unreal. It was unbelievable. The idea that my character standing next to all these iconic characters.

The most fun part of that process was going to Fox Studios and doing the table read because every character is there in the same room. That’s the only time that happens. When they go to record it, everyone has their individual lines and they’re doing it in the studio, so I got to see The Simpsons come to life with all these random people in the room. It was amazing.”