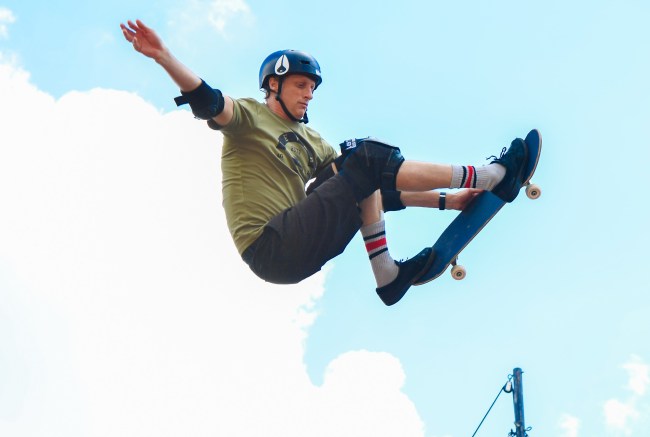 If you’re just waking up from a 35 year coma, you may look at Tony Hawk and be convinced that he is a hip suburban father who cashed out his tech stock and now lets his kids drink in the basement at a certain age.

The rest of us recognize him as the most influential skateboarder of all-time, entrepreneur, video game tycoon, and the man who’s helped construct 1,000 skateparks in America’s underprivileged areas.

Tony, now 52 and two decades removed from becoming the first human to land a 900, has evidently ran into many folks who have just awoken from a coma or finally emerged from under a rock.

Tony Hawk appeared on our Endless Hustle podcast (subscribe one time) and opened up about the Tony Hawk Mistaken Identity phenomenon that has been sweeping the nation in the past few years, in which Americans mistake him for stars like Lance Armstrong, Tom Brady, and even…Tony Hawk.

The Great @tonyhawk telling stories about him getting mistaken in public for….Tony Hawk on our @Endless__Hustle podcast is electric.

“The first time it happened where I thought it was a funny interaction was a few years ago in Alaska doing a heli snowboard trip. I was flying home and the TSA agent looked at my ID and my ID says Anthony because that’s my legal name. No one ever called me Anthony except for doctors and teachers on the first day of school.

And she said, ‘I wonder what he’s up to these days.’

And I looked at her and said, ‘This.’

And she just handed my ID and I went off. It was sort of this interaction that didn’t seem like it meant anything, but then I sat down at my gate waiting for my flight and I thought like, ‘That was pretty funny. If anyone had witnessed that and maybe knew who I was, they would think it was unbelievable. So I shared it, and that’s when it started.

It either happens because they see my ID and it says Anthony or they see me in person and they just know me from my younger days because that’s maybe when they saw me on TV or in video games or whatnot. So they don’t expect this face to get older. So they see my face and they’re like, ‘Man, you look like that one dude, but no, can’t be.'”

Huge missed opportunity to tell Tony that when you’re worth a quarter of a billion dollars, you don’t need to fly commercial and deal with stupid people who include, but aren’t limited to, the following:

guy at restaurant: "you famous?"
me: I think that depends on who you ask
him: "anyone ever tell you that you look like Tom Brady?"
me: never

Woman at airport: "My husband told me you're an awesome something something. Are you?" Me: "Yes, in fact it's the title on my business card"

TSA agent (checking my ID): "Hawk, like that skateboarder Tony Hawk!"
Me: exactly
Her: "Cool, I wonder what he's up to these days"
Me: this

Ticket agent: "Anthony Frank Hawk, are you related to the skateboarder?" Yes, that's me. "Well he doesn't normally go by Anthony Frank."

Woman on plane: "You look like Tony Hawk!" Me: Is that good? Her: "Well… he's that skateboard guy." <== insert response here, I had none.