EXCLUSIVE: Don Cheadle’s War Machine To Appear In ‘The Falcon and the Winter Soldier’ 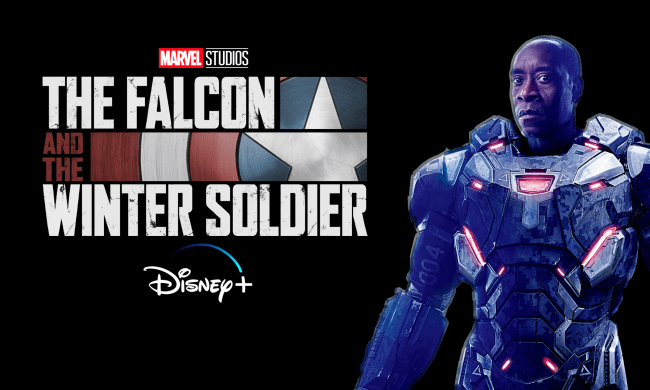 Don Cheadle — whose James “Rhodey” Rhodes is now the longest-tenured character in the Marvel Cinematic Universe — has revealed that War Machine will appear in the upcoming Disney+ series The Falcon and the Winter Soldier.

In an interview with BroBible’s Post-Credit Podcast, the 56-year-old Academy Award-nominated actor confirmed that Rhodes will “show up” in the upcoming Disney+ original, which stars Anthony Mackie as Sam Wilson (Falcon) and Sebastian Stan as Bucky Barnes (Winter Soldier).

“It’s really a fun and interesting and, by all imagination, completely open-ended — this can go anywhere. It’s great, I can’t wait to get in the room with the writers and figure out how all those things [connecting Armor Wars to the MCU] happen. You know, Rhodey shows up in Winter Soldier and Falcon’s show. So, it can be a lot.”

In addition to revealing War Machine’s appearance in The Falcon and The Winter Soldier, Cheadle also touched on his own upcoming Disney+ Armor Wars, stating that the death of Tony Stark in Avengers: Endgame “will play a role in the series”, which he said begins the writing stage of its production next month.

“The death of Tony Stark, I’m pretty sure, will play a role in the series,” Cheadle said.

“Where we’ve been sort of progressing Rhodey—even in the last film where he’s now up again and he’s now walking again and he’s now mobile again—so as the technology continues to develop and we keep making innovations in the suit and what happens, I imagine there’s gonna be another elevation and another way that we’re going to keep digging into that part of Rhodey.

“But really, figuring out a way to bridge what’s happening in the comic books with what’s happening on screen in the MCU and how we’re going to make those worlds work, that’s really exciting.”

The Falcon and the Winter Soldier will hit Disney+ on Friday, March 19, 2021. The series will be the second MCU project to hit Disney+ this year, followed by Loki in May, and What If…?, Ms. Marvel, and Hawkeye later this year.

As for Armor Wars, while Cheadle indicated writing begins next month, there’s no release date at this time.

Our full interview with Mr. Cheadle on the Post-Credit Podcast will be releasing later this week, so make sure to subscribe and check that out when it drops.