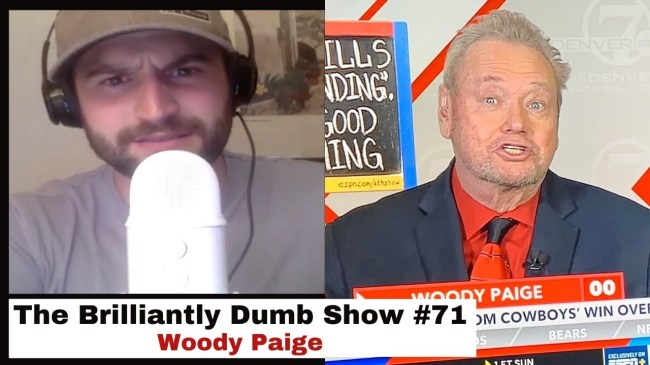 For those who don’t watch ESPN’s ‘Around The Horn,’ Woody Paige is known as being a straight shooter who tells it like it is and has little to no filter. Paige has been with ESPN longer than 99.9% of the people reading this blog have been alive (I think my dad reads these blogs which is where the .1 comes from). He has hosted shows with names like Stephen A. Smith, Skip Bayless, and Jay Mariotti. Paige wasted no time in our interview on The Brilliantly Dumb Show to express his dislike for Bayless. It was on an episode of ESPN’s ‘1st & 10‘ where Paige came to blows with the famous sports personality.

It was during the pre-show that host Jay Crawford told both Bayless and Paige that they would be discussing an article from GOLF Magazine that said golfers would give up sex for a year to improve their handicap by four strokes. Paige responded to Crawford by saying “there are a lot of years I gave up sex and didn’t improve my handicap, sure I would do that.” Crawford then turned to Bayless for what his response would be on the show to the same question claiming “I have a great golf game, I’ve had more sex than anybody in this room, combined.”

The producer at the time tells both Paige and Bayless to chose their words more carefully when it comes time to go live on air. When the topic comes up, just as Paige has done throughout his career, he stuck to his guns and gave the exact same answer. Then the question turned to Bayless on live tv, “would you give up a year of sex for 4 strokes off your handicap?” Bayless stuck to his guns as well, “I have had more sex than Woody has even thought about.”

Paige continued, “so I got up, went over and started choking him. I grabbed him by the throat and honestly, he worked out more than me, he was in a lot better shape than me. That argument turned into a fight that ended up on the floor and close by was a door that led to 8th and 34th street in New York City, we could hear producers in our ear saying, let them go, let them go. I was genuinely upset with him because I told him not to do that, and I had enough of him.”

I can honestly say Woody Paige was one of the most electric guests we have had on the show, there is nothing that man held back. He is the same person you see on tv and it translated over to the podcast, which made for one hell of an episode of The Brilliantly Dumb Show. Be sure to like and subscribe to The Brilliantly Dumb Show on YouTube, Apple Podcasts, and Spotify.