Women Revealed Some Common Things Men Do That Creep Them The Hell Out, So Pay Attention, Guys 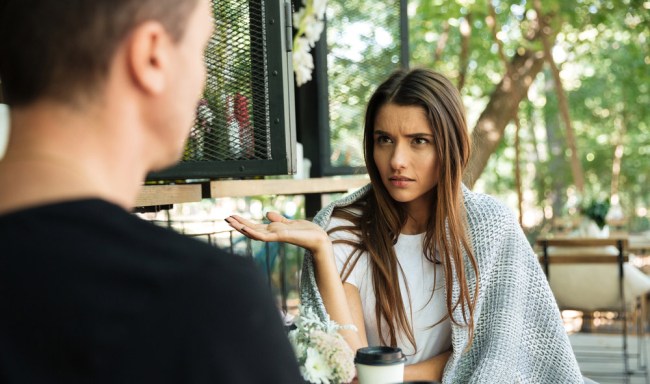 The last thing you want to be, at least if you’re not a lunatic, is that guy that women think is creepy. I mean, everyone does something creepy every now and then, and may not even realize what they’re doing is creeping other people out, but if you had that knowledge you’d probably stop doing it, right? RIGHT?

So to help us out in not being creeps, on purpose or otherwise, several women were nice enough to reveal some of the things we men do that creep them out.

Might want to jot down a few notes here, fellas. Though a few of these should already be obvious…right?

Super common: getting mad at me for not acknowledging them or smiling when a guy passing on the street or on a hiking trail says something along the lines of “What’s wrong? Smile, beautiful!” ~ kmatts

Hitting on you at work, especially in a service industry role. I can’t get away from you, part of my job is to be nice and polite to you, I can’t get tell you to fuck off or I might get fired. I hated it when guys did this when I was a waitress or barmaid. ~ Whapwhaaap

Thinking that just because I have the same hobby as you that you don’t see many women playing (Overwatch, MtG, DnD, etc) that I 1) must be prime dating material, and 2) don’t know what I’m doing. ~ hploy

The other day I was watching a video on my phone and someone put their hand over my phone so I had to look up. All he wanted to do was hit on me. No thanks… ~ italyinsummer

Not taking the social cues that I’m not interested.

I was on the bus last week, reading a book with my headphones in and a guy actually leaned over and pulled them out. Reading a book/wearing headphones are like universal signs for “leave me alone.” I gave him a dirty look and he got all huffy as if I was the rude party. ~ shinyruins

Being a petite person, men in bars seem to think it’s funny to try and literally pick me up. They see it as a way of flirting. I see it as a way to get severely hurt if I’m dropped. ~ Goalieamd

Asking personal questions…like “What did you do last night?”, “What did your boyfriend think about that?” “Is your mattress comfortable?” all within a few minutes, when a basic “How are you?” would have been more than enough. ~ Bongu01

Being overly friendly or familiar. If I don’t know you, don’t treat me like we’re best friends. If I’ve never seen you before, don’t act like you know everything about me. Don’t assume I want to become friends with you. You’re a total stranger. ~ ActualGuesticles

I don’t want to hear about how you prefer my hair this way, or that you wish I wore skirts more often, or that you’re glad I grew my hair out because you prefer long hair. I’m here to work. General rule is if you’d make the complement to your male coworker, feel free to make it to me, but if you would feel uncomfortable making that compliment to cubicle buddy Mike you should probably be keeping it to yourself. ~ supersexygoldfish

Guys trying to take sneaky pictures. I didnt notice it initially, but then one time his phone wasn’t on silent. Makes me not want to go out on public. ~ aegyeon

When a guy stands near me and just smiles at me for several minutes… non-stop… without saying anything. ~ swiffa

Please don’t look at me & lick your lips. Especially don’t do that with your head tilted down but your eyes looking up. I’ve seen multiple men do this & it’s fucking terrifying. Don’t put your hands anywhere near a woman’s drink. And finally it you are going to talk to a woman just do it straight off the bat; don’t follow her around first. ~ ImNotHimEither

Not respecting my “no.” I don’t need to justify why I’m not interested. I don’t need to have a boyfriend for you to back off. I don’t need to tell you why I’m dressed the way I’m dressed. Just NO. Respect my answer, I don’t owe you anything. I don’t mind people asking me for my number or asking me out as long as they are respectful when I tell them no. I respect the hell out of a man that can take rejection and not do a 180 and get invasive or rude. It makes me so uncomfortable to have to deal with these types of interactions. ~ satanintraining

Don’t get me started on late-night Uber drivers. You are driving me to my HOME. You can’t lasciviously compliment my outfit or repeatedly ask why I’m not married, dude. ~ ficcionella

If we’re the only two people at the bus stop, there is no reason that you would need to stand directly next to me. ~ fkdsla

Check out the rest of the responses over at Reddit, and remember, don’t be that guy.