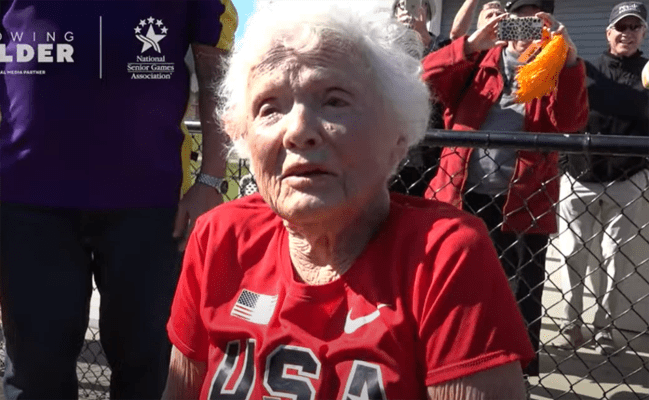 Julia Hawkins is disappointed in herself after setting a world record. The 105-year-old retired Louisiana teacher made history over the weekend but she is not satisfied.

Hawkins, who is also called “The Flower Lady” for her gardening skills, and “Hurricane Hawkins” for her speed, competed in the 100-meter dash at the 2021 Louisiana Senior Games. The event is the state’s qualifier for the biennial National Senior Games.

At 105 years young, Hawkins was in an age bracket all on her own. She became the first American and the first female track and field athlete to compete in the 105+ age category.

The only other track and field athletes to compete in her age bracket were men— Japanese sprinter and shot putter Hidekichi Miyazaki and Polish runner and discus hurler Stanislaw Kowalski. Hawkins is truly one of a kind and only took up running when she hit the centennial mark.

Hawkins crossed the finish line in 1:02:95. She had hoped to run faster than she did.

“It was wonderful to see so many family members and friends. But I wanted to do it in less than a minute,” Hawkins said after the race.

When somebody in the crowd asked Hawkins if it was any consolation prize that her time was still less than her age, she simply replied with a swift “no.”

What a legend! Here she is in action:

That record was broken in September by 100-year-old Diane Friedman. Fortuitously for Hawkins, she was on to making history of her own.

Prior to taking up track and field, Hawkins was a lifelong cyclist. However, she lost interest later in life because there wasn’t enough competition.

Now that she has rediscovered her passion in running, she does not plan to stop.

“I want to keep running as long as I can,” Hawkins said. “My message to others is that you have to stay active if you want to be healthy and happy as you age.”