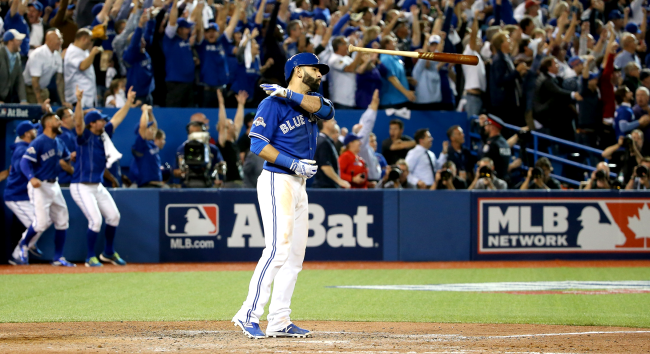 Jose Bautista, he of the legendary bat flip to the moon, had 7,244 plate appearances over 15 seasons playing for the Orioles, Devil Rays, Royals, Pirates, Blue Jays, Braves, Mets, and Phillies.

Recently, Joey Bats had the opportunity to face off against a 13-year-old Wiffle ball pitcher who goes by the handle Doodoo Biscuit on TikTok and YouTube.

Seriously, check out the back of his jersey in the video below. It says right there where the name appears on the jersey, Doodoo Biscuit.

Because as you will see in the video, Doodoo Biscuit made the now 41-year-old former MLB slugger almost look like he’d never swung a baseball bat before.

In eight pitches, Jose Bautista only manage to make contact once – a week dribbler.

The video of the epic encounter has been viewed over two million times on TikTok, Twitter, and YouTube.

Check out some of the comments from people who watched Doodoo Biscuit work his magic on a one-time Major League Baseball superstar.

Check his pitching hand for a "foreign substance". No way that ball moves like that naturally.

Fool me once, shame on you. Fool me twice, Doodoo Biscuit.

In case that reference flew over your head, here you go…

He is equally down for clowning his travel ball coach…

Okay, his name isn’t really Doodoo Biscuit. It’s Landon Rawlins and he says his dream is to entertain people with his videos. So far so good, I would say.