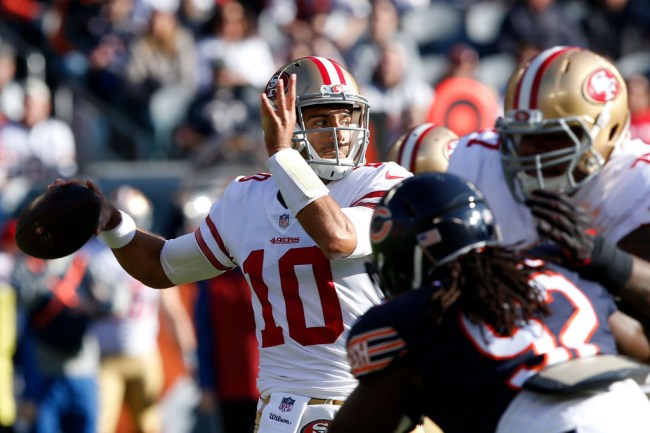 It’s Week 14 which means we’ve entered just win territory. You don’t need a pre-game speech from me. Just go out there and kick some ass.

Handsome Jimmy was traded away from New England because Brady couldn’t handle that he was the second best looking quarterback on the team and was worried his wife would leave him for Jimmy. Brady also didn’t want to worry about losing his job as he got older. Ok maybe that’s not completely true, but it’s an interesting theory. That aside, Garoppolo looked really good last week in passing for over 300 yards against Chicago and now gets to take on the team giving up the second most fantasy points per game to quarterbacks. Handsome Jimmy might end up being just fine in California.

The Giants run defense has really fallen off this year and it’s shown in their last five games as they’ve given up over 100 yards rushing in four of them. With the Cowboys focusing back on the running game in recent weeks as they realize Dak Prescott can’t lead the offense by himself, Morris should see success and has a good chance at finding the end zone.

Drake showed what he could do last week with a full workload and anyone who started him was very happy. There’s no reason to feel bad about starting him again this week because he’s theoretically match-up proof. The Patriots are the 32nd ranked run defense according to Football Outsiders DVOA, but you’re probably worried that the Patriots will get out to a big lead and force Miami to throw more often than run. That’s fine for Drake as he’s very effective in the passing game and will take all the dump off from Jay Cutler as he’s under pressure from the Patriots pass run. We love the Drake this weekend.

Jimmy has to throw the ball to someone right? Goodwin is at the top of the totem pole for 49ers receivers and killed it last week as Jimmy’s #1 guy. Expect a repeat performance as Jimmy and Goodwin combine to kill the Texans this weekend.

I wanted to wait a week before endorsing Gordon for two reasons. I wanted to see how many targets he received and I wanted to see what he did with those targets. He passed both tests, so now we can assume Gordon is close enough to the old guy we used to know. Cleveland is always trailing in games, so Gordon will be used heavily. With Green Bay allowing the fourth most points to fantasy wide receivers, Gordon should perform well in his second game back.

Any Giants fan will tell you how Witten has killed them over the years and they aren’t lying. In 29 games, Witten has averaged 1.5 more points in ½ ppr scoring against the Giants compared to every other team in the league. The Giants are even worse now at covering tight ends than ever, so Witten should crush it on Sunday.

If you own Wentz, chances are you’ve been near the top of your standings all year after his breakout performance. The Super Bowl parade is going to take a break this week as the Eagles head to L.A. because things won’t be as cushy as the opponents Philadelphia has faced earlier this season. The Rams are allowing only 12.7 fantasy points to QBs this year including nine out of 12 games with 14.3 points or less. You need quality production out of your QB position to win and with all the potential streamers out there, it’s better to defer your love of Wentz for one week before you bring him back into the fold.

Remember when Fournette thought the NFL was easy? How’s that going now? Fournette has only surpassed 100 yards once in the last four games in which he played. He likely also hasn’t fully recovered from his ankle injury, but that’s no surprise since he was always injured in college. Combine that with Seattle’s tremendous run defense which has excelled since adding Sheldon Richardson and you have a problem. Seattle hasn’t allowed a 100 yards rushing since Week 3, which means you’re relying on Fournette to score a touchdown to get the value you need. With only one touchdown in his last four games, it shows Jacksonville has no problem throwing (a current weakness for Seattle) once they get in the red zone.

Anderson returned to being the bellcow for Denver last week, but that might’ve been because Devontae Booker was dealing with the flu. With that hanging over his head this week, he now faces a Jets defense that has generally been good against the run all year and has allowed the fifth fewest fantasy points to RBs all year including only two rushing touchdowns since Week 3. The RB situation around the league is so diverse in getting that mid-level production that you should bench Anderson for an alternative here.

After being embarrassed by Marvin Jones on Thanksgiving, Xavier Rhodes responded with a shutdown performance of Julio Jones. (It’s also not rocket science to game plan your defense around stopping the opposing team’s best players.) Now Rhodes goes against Funchess, a receiver who’s more about physicality than speed and fits the profile of a receiver Rhodes should be able to shut down. That doesn’t bode well for the alumni from Michigan.

Sanu’s been a guy we’ve liked a times this year, but not this week. Ken Crawley has been incredibly impressive as defender this year opposite Marshon Lattimore and has the ability to take down Sanu in this situation. Sanu will likely work some in the slot, but he’s usually a better guess when attacking an inferior option across a shutdown corner. Atlanta’s likely better feeding Julio against a potentially still-insured Lattimore or relying on the running game on Thursday.

As long as Luke Kuechly plays, you don’t want to play your tight ends against Carolina. Carolina has only allowed two games of more than 50 yards to the tight end position this year and average less than a touchdown scored against them at the position as well. That’s not the greatest opportunity for Rudolph in an environment where there are generally plenty of mid-level TE options to choose from.