Saturday’s Final Four showdown between Duke and the University of North Carolina was one of the most anticipated college basketball games in recent memory; it not only marked the first time the longtime rivals faced off against each other in the NCAA Tournament but was potentially the last time the world would get to see Mike Krzyzewski coach the Blue Devils.

As a result, it was no surprise that spectators who hadn’t snagged a ticket before the matchup was solidified were paying close to $500 for the cheapest seats in the house (and others shelled out even more for a view that makes you wonder why they left their house in the first place).

There’s little doubt the hype would be through the roof if Monday night’s championship game featured Coach K getting the chance to cap off his time at Duke by cutting down the net for the sixth and final time in his career. However, the Tarheels were having absolutely none of that nonsense, as they’ll be the ones facing off against Kansas after spoiling the party over the weekend.

UNC’s victory was also the catalyst for a fire sale when it comes to tickets for Monday night’s game, as it would appear the absence of Coach K and his squad has made people much less inclined to head to the Superdome to watch the championship play out in person.

While the cheapest tickets to get into the building on Saturday sold for around $130 ahead of tipoff, you can currently find plenty of offerings for the title game hovering around $25 on a number of secondary marketplaces. 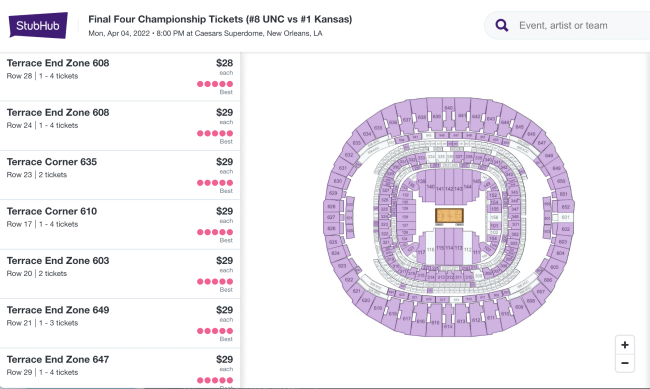 It’s wouldn’t make much sense to compare this year’s tournament to last season’s, as 2021’s $602 get-in price wasn’t really reflective of the hype but can be primarily attributed to the availability issues stemming from the NCAA’s reduced capacity mandate.

With that said, the lowest price in 2019 was around $100, and while 2018 was considered a bargain compared to the few seasons that preceded it, it still would’ve cost you $60 to watch Michigan take on Villanova.

The “Duke Effect” is very real.