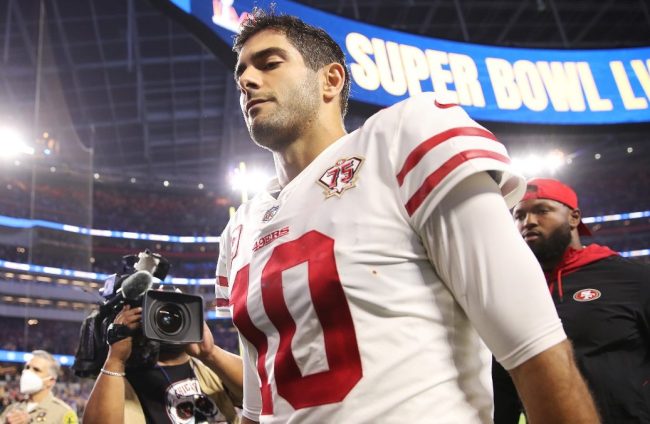 The San Francisco 49ers have completely moved on from Jimmy Garoppolo as they’ve given the reigns over to Trey Lance. As of now, the veteran quarterback is on the trade block but there have been no suitors as of yet. However, it sounds like some new information has come to light about Garoppolo, as he reportedly ghosted the 49ers after they gave him a massive contract.

Jimmy Garoppolo Ghosted The 49ers After Securing The Bag

According to the San Francisco Chronicle, back in 2018 when the front office made Jimmy Garoppolo the highest-paid quarterback in the league, he completely ignored the team. One member of the coaching staff claims, “Once he left that press conference, nobody heard from him for weeks and weeks. He didn’t return calls, he didn’t return texts. He basically just vanished. And we were looking at each other going, ‘What just happened?'”

Report: Jimmy Garoppolo repeatedly ignored coaches after the #49ers made him the highest paid QB in NFL history.https://t.co/KEw6FrhDBE pic.twitter.com/8lrcXq5E61

In addition to that, according to NBC Sports, Peter King reported rumors of Jimmy Garoppolo not even owning a playbook. He goes on to say, “When the other 89 men on the San Francisco roster are practicing outside, Garoppolo is usually inside, or on his way home. I heard he does not have a playbook, does not attend quarterback or team meetings, and barely knows new quarterbacks coach Brian Griese.”

If any of this is true, then no wonder the 49ers are eager to move on. At the same time, the timing of these reports are brutal for San Francisco, as this information could significantly drop Garoppolo’s trade value. Especially considering Chris Simms even confirms these rumors.

Story confirmed by NBC @CSimmsQB: “I’ve heard this from players, ex-coaches there. He goes off radar all the time. Nobody can get in contact with him.”

“They had to drive to his house and knock on his door ‘Hello? are you alive??'”

We’ll see how it all plays out. Luckily the 49ers have Trey Lance as they hope he can become the franchise quarterback they need to win a Super Bowl. As for Jimmy Garoppolo, he should be on a new team at some point but.