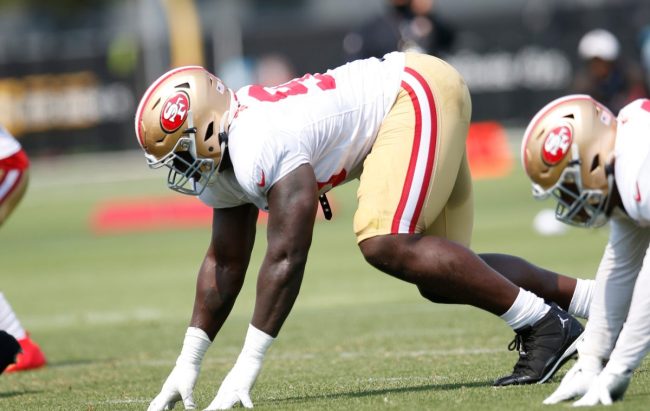 Javon Kinlaw is a massive human being. It’s been that was since his days at Goose Creek High School in South Carolina. The 6-foot-6 monster used that size, as well as some insane athletic abilities, on his rise to the NFL.

Kinlaw played for South Carolina in college, becoming one of the most feared defenders in the SEC. He led the team in sacks as a senior on his way to being named a first-team All-American. He was San Francisco’s first pick in the 2019 NFL Draft, selected to help anchor a defensive line that boasts Joey Bosa on the edge.

Kinlaw showed flashes as a rookie, recording 33 tackles and an interception, which he returned for a touchdown. The athleticism was on full display.

Unfortunately, he dealt with injuries in season number two, leading many to doubt whether he’d ever produce to his full potential. Now, he’s working to prove those doubters wrong in a 2022 redemption tour, and from the looks of it, he’s used that offseason hate as fuel to get in the best shape of his life.

Kinlaw was seen at 49ers camp looking absolutely BOASTED. Not only does he still carry that 6-foot-6 frame, but his core appears shredded, too. He certainly passes the eye test when getting off the bus.

Javon Kinlaw looks ready to cause havoc in 2022 pic.twitter.com/eQfjEsTNhm

His new physique has many believing he’s in for a big season.

Kinlaw has been working hard in the gym this offseason as he looks to record the best season of his young career. More importantly, though, he seems to be enjoying putting in the work.

Kinlaw was spotted boxing as part of his offseason training program, and it looks like it’s paying dividends. I’d hate to take a punch from the lineman.

With training camp kicking off, he appears to be having a little more fun on the field, too. After being hampered by injuries in 2021, Kinlaw is eager to return to the trenches.

He posted a picture on social media earlier this week with the caption, “Really forgot how fun this sh-t was.”

Things seem to be looking up for a monster year.