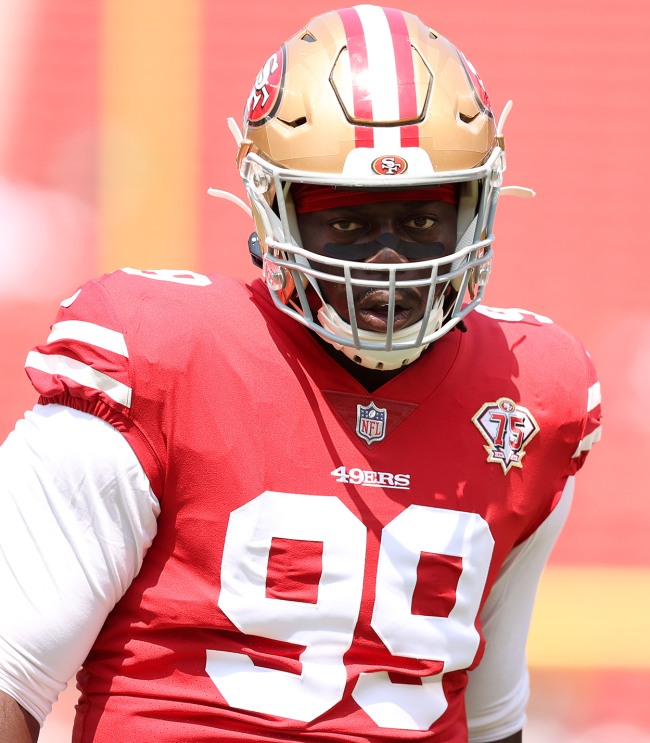 San Francisco defensive tackle Javon Kinlaw is not one to mince words with the media. When he speaks publicly, he is always raw and calls it how it is.

Earlier this year, Kinlaw joined Brad Graham to discuss a variety of topics. Among them, he spoke on the fact that players are humans too and, like every other human, they have a breaking point when it comes to how they are perceived and discussed in the media.

Well, apparently, Kinlaw reached his breaking point with FanNation’s Grant Cohen. The Sports Illustrated-affiliated reporter is known for his provocative commentary and often upsets athletes with his phrasing or tone.

Typically, players are fairly respectful in pushing back on Cohen when he crosses the line. George Kittle and Jimmie Ward have done so in the past.

George Kittle: "Actually Grant, the only person who has asked me to not play is you. I think you said I should only practice my little heart out, but I'm going to play it out just for you, Grant. I can't wait."

Other players, however, will not even give Cohn the time of day. Arik Armstead is one of them.

@grantcohn great 4 play breakdown. I’ve played 179 snaps this season. Quick question for you have you ever played football in your life ? By the looks of you I’ll say no. Furthermore what makes you qualified to analyze football ?

If you knew football and how to build a team you’d work in the front office of a NFL team instead of whatever you call yourself. Imagine that https://t.co/hjy9OFTNqe

🤡 hating so much wishing your stupid predictions came true. A know it all that is wrong majority of the time . The worse @grantcohn pic.twitter.com/wMmFrMTuU4

Needless to say, Cohn is not particularly well-liked amongst the players he is covering and it’s not hard to understand why.

And as of this week, Javon Kinlaw is one of the 49ers players to call-out Grant Cohn.

Kinlaw appeared in only four games last season before undergoing ACL surgery that shut him down for the rest of the year. Since — and even before — then, Cohn has been one of the loudest voices doubting Kinlaw.

Cohn has said the following about Kinlaw:

And apparently Kinlaw had enough.

During practice on Tuesday, Kinlaw confronted Cohn directly. According to the reporter, he said that Kinlaw approached him with some choice words and knocked the hat off of his head. More words were also exchanged later in practice.

Later that evening, once the day had wrapped, Kinlaw joined Cohn on his YouTube channel.

TO BE VERY CLEAR, Cohn was excited about the confrontation. When the stream began, he said that he was thrilled that Kinlaw called him out at practice because it will only help to boost his brand recognition. And then, after bringing Kinlaw on his stream, the antagonizing didn’t stop as the former first round pick proceeded to lay into Cohn.

The full exchange went on for about six minutes and included an all-time quote from Kinlaw.

“My balls is bigger than yours, brother. Put some respect on my name.”

Here is the most explosive part of the “conversation,” if you can even call it that:

Kinlaw may receive some backlash for his comments. He probably knew that going in.

But he wanted to make his voice heard and he did. And his teammates are backing him up.

A consistent negative, disrespectful, and demeaning tone to players and their craft. Like we are animals. Then talks about “game” to antagonize a player enough so he can sue him? We shouldn’t have to answer to media of this level. The 49ers/NFL should protect us better. https://t.co/QQVrX4Rjua

Credit to Kinlaw. Credit to the 49ers for speaking out.