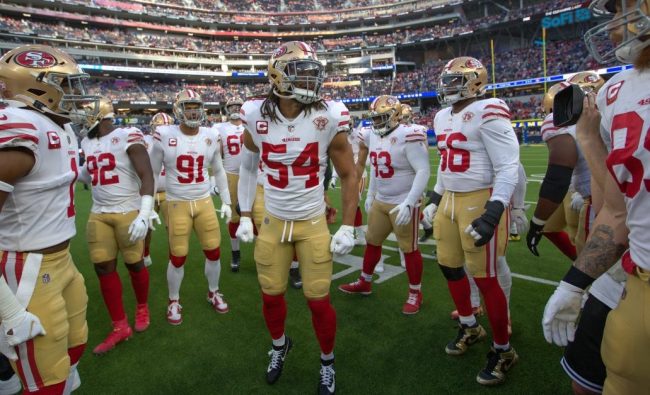 Sometimes fights happen in training camp but for the San Francisco 49ers, things got a little out of hand on Tuesday. Apparently, there has been some turmoil between the offense and defense, specifically Brandon Aiyuk and Fred Warner. The coaching staff will likely handle the situation, but it’s been a crazy day for this franchise.

According to David Lombardi, Aiyuk and Warner have been butting heads since training camp kicked off. The 49ers receiver claims that his defensive teammate has been “annoying” and “irritating,” which seems to have built up this fight on Tuesday. However, Fred Warner claims everything he is doing is strictly for motivating his teammates.

Background to the two-round fight at today’s 49ers practice between Brandon Aiyuk and Fred Warner (and obviously involving a lot of reinforcements).

All of that escalated on Tuesday though, as both Brandon Aiyuk and Fred Warner legitimately squared up, per Nick Wagoner. After Warner delivered a hard hit on Marcus Johnson, Aiyuk jumped into action to back up his teammate. From there, everything spilled over into a commotion, as both the offense and defense went at it.

#49ers A wild day with a couple of fights as things escalated between WR Brandon Aiyuk and LB Fred Warner. At one point, Aiyuk and Warner squared up like an actual boxing match which led to full fledged brawl. A Warner hit on WR Marcus Johnson seemed to spur that one.

An exceedingly angry Kyle Shanahan stopped practice after that, calling for a huddle which he started with some choice words before they resumed. Tensions cooled, few plays later Dre Greenlaw made enough contact to knock Kyle Juszczyk down and Warner hustled over to help him up.

They made it through rest of practice without incident. Been doing this for 19 years, seen plenty of these things, not a huge deal but somewhat rare to see two key players going after each other like that. OT Trent Williams was trying to calm Warner after the second scuffle.

Warner spoke last week about purposefully targeting Aiyuk as a means to try to help raise his game. Aiyuk had (semi) jokingly called Warner annoying. Add pads and the warmest practice of camp so far and this is the result.

Hopefully, everything cools down so the 49ers can get back to practicing. They have a long season ahead and any turmoil could abrupt their playoff chances.