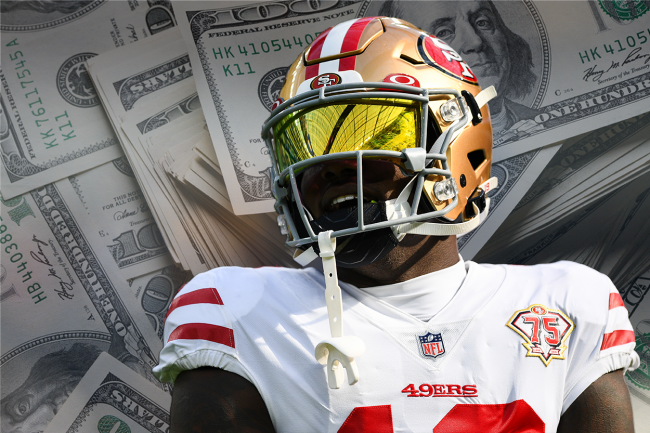 Deebo Samuel became the first ‘Wide Back’ in NFL history last year. The unofficially official term was created by the 49ers wide receiver as his team gave him significant touches in a running back role.

Despite how successful he was in the role, Samuel was never supposed to get as many carries as he did. He is a pass-catcher first.

However, when San Francisco’s running back room was hit with the injury bug and starter Raheem Mostert was declared out for the season in September, the team pivoted. They went with a simple strategy— get the best athlete the ball.

That was Samuel. As a result, the former second round pick became a Wide Back.

Over the course of 2021, Samuel carried the ball 59 times for 365 yards and eight touchdowns in addition to his 77 catches for 1,405 yards and six touchdowns. He was a significant portion of the 49ers offense, obviously.

After a remarkable year, and an offseason during which wide receivers around the league were getting paid, Samuel held-in during the first week of training camp. He wanted a contract extension and stayed on the sideline as his team practiced.

On Sunday, San Francisco and their star offensive player reached an agreement. Samuel received a 3-year extension worth $73.5M with $58.1M guaranteed.

But that isn’t all. He will get paid even more money if the team continues to use him as a running back.

Samuel also will earn $150,000 if he scores three rushing TDs in any one year.

San Francisco should have its primary ball-carriers back at full health in 2022. That will allow Samuel to return to his natural home at receiver on a more full-time basis. While that should decrease his touches out of the backfield, the team may still choose to use him in the run game, seeing how successful it was last year. If that happens, Samuel will get paid even more than his contract already will.